The sharp decline in U.S. births after the onset of the Great Recession—especially among Hispanics—has slowed the nation’s transition to a majority-minority youth population, according to new Census Bureau data released today. 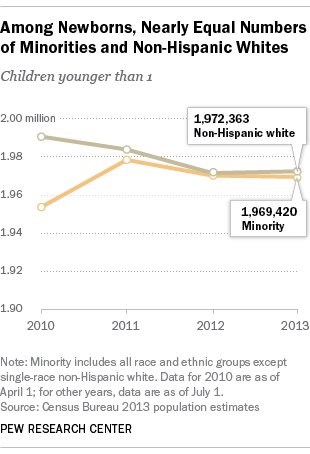 But minorities are not yet the majority of any age group, even babies, in the bureau’s new estimates. Among the nation’s 3.9 million children younger than age 1 in 2013, there were about 3,000 more non-Hispanic whites than minorities—essentially equal shares. In addition, the bureau published revised estimates today for 2011 and 2012 that also showed slightly more non-Hispanic whites than minorities in that youngest age group.

The revisions represent a reversal for the bureau, which announced two years ago that most children younger than age 1 were minorities in 2011, a widely reported demographic milestone. The bureau’s original 2012 estimates also had minorities in the majority among the youngest children. 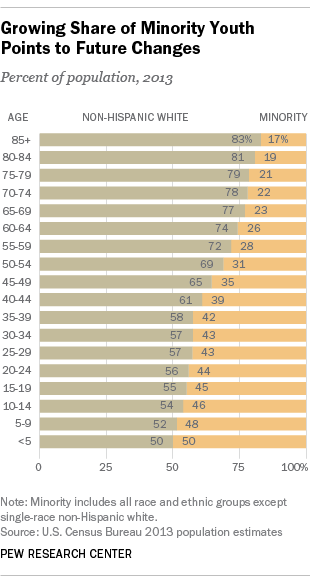 It is not unusual for the Census Bureau to revise previously released population estimates, based on new data. The bureau is handicapped in compiling its estimates because it relies on information from other agencies that often is out of date. For example, in assembling its estimates for 2012, released a year ago, the bureau had birth data from the National Center for Health Statistics only through Jan. 1, 2011. It updated the numbers based on past population patterns.

But after the onset of the Great Recession in 2007, U.S. births dropped sharply, in a break with the past. The number of births declined from 2007 to 2012 before ticking up slightly in 2013, according to preliminary data from the National Center for Health Statistics. The nation’s birth rate, which has been declining since 2007, hit a record low in 2013. Birth rate declines were especially steep for immigrant and Hispanic women. Those two groups are among the main drivers of the nation’s demographic future, in which non-Hispanic whites will no longer be the majority. By 2043, the Census Bureau has projected that no racial or ethnic group will account for more than half the total U.S. population.

The change is happening first in the youngest age groups, because of births to minority mothers or mixed-race couples. Minorities are more likely than whites to be of child-bearing age; Hispanic and black women have higher birth rates than do non-Hispanic whites.

The recent decline in Hispanic fertility already has had a demographic impact in California. The governor’s budget, released in January, said that Latinos would become the state’s largest race or ethnic group by March, edging past non-Hispanic whites. It acknowledged that the milestone arrived about seven months later than had been anticipated last year, because of lower-than-expected Hispanic birth rates.

The Census Bureau data still shows higher shares of minority births than does the National Center for Health Statistics, whose preliminary 2013 data indicate that non-Hispanic white mothers accounted for 54% of births, as they had in 2012 and 2011. The gap to some extent reflects differences in the way the two agencies measure births by race.