When it comes to questions about morality, Europeans tend to see things a little differently than others around the world. On a range of moral issues, some of the globe’s most liberal opinions are found in the EU.

People in 40 countries were surveyed last spring about eight topics and were asked whether they considered each morally acceptable, morally unacceptable, or not a moral issue. Europeans were consistently less likely to judge these things as unacceptable compared with Latin Americans, Asians, Africans and Middle Easterners. 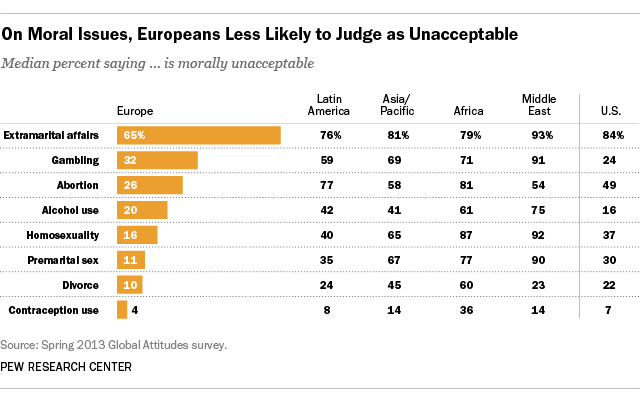 Infidelity is the one issue that draws the most opprobrium from Europeans: Across the eight EU nations polled (Britain, Czech Republic, France, Germany, Greece, Italy, Poland, Spain), a median of 65% deem extramarital affairs unacceptable. However, even on this topic, the percentage describing infidelity as unacceptable is lower in Europe than in other parts of the world. Moreover, Europe has the only country — France — where less than half believe infidelity is unacceptable. Among the French, just 47% hold this view. In contrast, fully 84% of Americans think extramarital affairs are morally wrong.

Medians of more than 50% in other regions believe gambling and abortion are unacceptable. In Europe, the medians are 32% and 26%, respectively. A median of only 20% consider drinking alcohol immoral in Europe, compared with 41% in the Asia/Pacific region, 42% in Latin America, and even larger numbers in Africa (61%) and the Middle East (75%).

Americans are actually more liberal than Europeans overall regarding gambling and alcohol, but they are much more likely than Europeans to find abortion unacceptable.

On homosexuality and premarital sex, Europe is again the world’s most tolerant region, with Latin America coming in a clear second. Very few Europeans see divorce or contraception as immoral, although on these issues their views more closely align with others around the world.

Explore attitudes in countries around the world with our Global Views of Morality interactive.