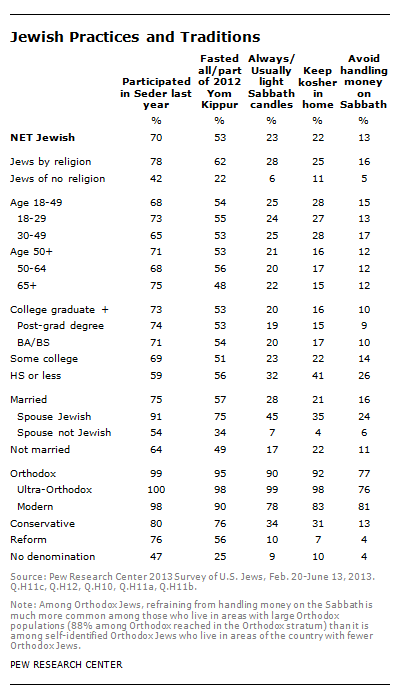 The Jewish festival of Passover begins at sundown tonight, when many Jews will gather with family and friends for the first of two Seders. While the exact nature of a Seder varies, Jews traditionally read from a book known as the Haggadah – or “telling” in Hebrew – and retell the story of the exodus from slavery in Egypt before eating a festive meal.

Among several common traditions are a Seder plate with symbolic foods, a reading of the “four questions” to explain the uniqueness of Passover and a search by children for a hidden afikoman (a broken piece of matzah, the unleavened bread that is eaten during the holiday).

A 2013 Pew Research survey of Jewish Americans found that attending a Seder is an extremely common practice for the group. While only 23% of U.S. Jews said they attend religious services at least monthly, 70% said they participated in a Seder last year. That includes 42% of Jews of no religion (those who consider themselves Jewish in some way, were raised Jewish or had a Jewish parent, but say they are atheist or agnostic or have no particular religion.)

Participation in a Seder is more common among Jewish Americans than any of the other practices we asked about, including fasting for all or part of Yom Kippur (53%) – often considered the holiest day of the Jewish calendar – and always or usually lighting Sabbath candles (23%).