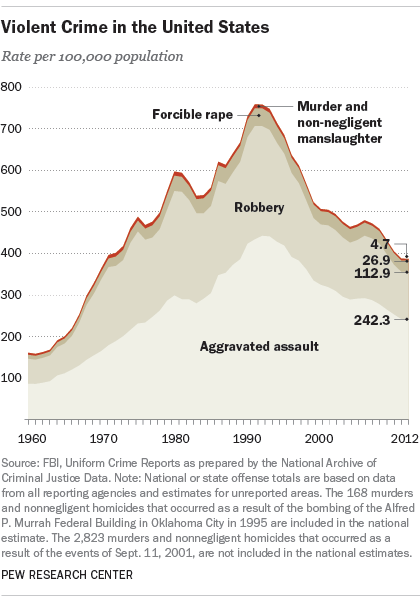 The U.S. has long stood out for its support of capital punishment. For most of the past eight decades — basically the entire history of scientific polling — surveys have nearly always found solid majorities in favor of the death penalty. But that support has ebbed and flowed, and now has been trending lower for almost two decades. A new Pew Research Center analysis finds 55% of U.S. adults favoring the death penalty for people convicted of murder, the lowest support level since the early 1970s.

Researchers have suggested several reasons for the decline in death-penalty support since the mid-1990s. Among them: a steep drop in the incidence of violent crime, and greater attention to wrongful convictions, which has led to more than 1,300 convicts being exonerated through DNA evidence, revelations of faulty forensic work, or other means. (Recent reports of prolonged executions and the difficulties many states have had in procuring drugs for lethal injections also may be factors in shifting public opinion.)

In  general, public support for the death penalty has tracked rates of violent crime, as calculated by the FBI. (The FBI has long compiled and reported uniform crime statistics, although not all local law enforcement agencies participate and some people have challenged the way they classify and report crimes.) The agency defines violent crimes as murder, non-negligent manslaughter, forcible rape, robbery and aggravated assault.

Violent crime rates and death-penalty support both peaked in the early-to-mid 1990s. According to the FBI data, 1991 was the worst year for violent crime in America, with 758.2 reported crimes per 100,000 people. In December 1993, 25% of Americans called crime the most important single issue facing the country, in a Times Mirror Center survey. By the following September, a record 80% of Americans supported capital punishment,  according to Gallup.

As of 2012, the most recent year available, the overall violent-crime rate had fallen to 386.9 reported crimes per 100,000, the lowest rate in more than four decades. Murder, the crime that most commonly carries the death penalty (and which all people currently on death row were convicted of), was down to 4.7 per 100,000, about where it was in the early 1960s. 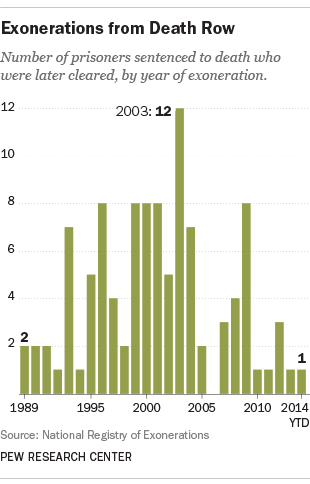 Meanwhile, advances in DNA analysis and other forensic techniques have aided a surge in exonerated prisoners. The National Registry of Exonerations, jointly maintained by the University of Michigan and Northwestern University law schools, lists 1,339 people who’ve been exonerated since 1989, including 106 who had been sentenced to death.

DNA, though far more commonly used now than two decades ago, was a factor in fewer than a third of those exonerations. According to the database, more than half of all exoneration cases involved perjured testimony, false accusations or some form of official misconduct. (Cases often have more than one contributing factor.) 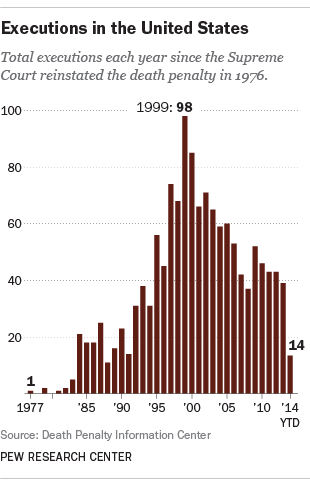 Actual executions — which, given the many years that typically elapse between sentencing and execution, are something of a lagging indicator — peaked in 1999, when 98 people were put to death. But they too have fallen, to an average of about 43 over the past decade. (So far this year, 14 people have been executed around the country, according to the Death Penalty Information Center.)

Since the Supreme Court reinstated state death-penalty laws in 1976, a total of 1,373 people have been executed — all but 3 in state prisons. More than a third (512) of all executions have taken place in Texas; that state, along with Virginia and Oklahoma (110 each), Florida, Missouri and Alabama together account for two-thirds of all executions in the United States in the past 37 years.