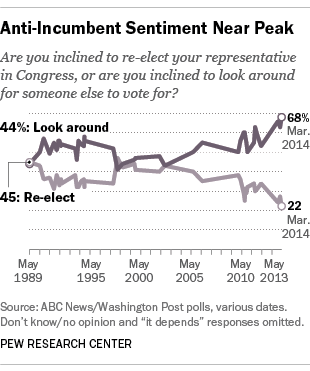 The public’s anti-incumbent mood is at record levels, but the vast majority of senators and representatives running for re-election appear to have little to worry about. What’s up with that?

The Rothenberg Political Report currently rates 383 House seats as safe and 13 as having a clear favorite; the Cook Political Report deems 358 seats safe and another 33 “likely” wins for either party. Both firms have similar estimates for the number of competitive seats in the November elections: 44 (Cook) and 39 (Rothenberg). The University of Virginia’s Center for Politics, which rates 41 races as tossups or leaning to one party or another, also sees little prospect for massive change: As senior columnist Alan Abramowitz wrote last month on the Center’s “Crystal Ball” site, the fall elections “are likely to result in minimal change in the party balance of power.”

That would seem to be at odds with recent survey results.  A Washington Post/ABC News poll released this week, for instance, found that only 22% of the public said they were inclined to re-elect their representative in Congress. The all-time low (since 1990) was 17% in August 2011, just after that year’s debt-ceiling showdown. In the latest poll, two-thirds (68%) of people said they were “inclined to look around for someone else to vote for,” also a high for the Post/ABC poll. 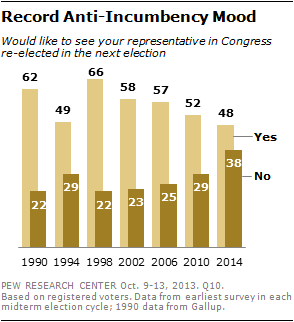 Last fall, a Pew Research Center survey also found record anti-incumbent sentiment, though it went about measuring it somewhat differently. We asked registered voters whether or not they’d like to see their representative re-elected in the next election. Fully 38% said no, the highest level for that response in the two decades we have been asking that question.

Of course, it’s one thing to say your representative doesn’t deserve to be re-elected, or even that you’re open to voting him or her out, and actually doing so. Historically, Americans have been more favorably disposed toward their own representatives than to Congress as a whole (a phenomenon dubbed “Fenno’s Paradox,” after eminent political scientist Richard Fenno). That disjuncture that has been reflected in typically high re-election rates. On average, in each of the seven House elections between 1978 and 1990 (inclusive), fewer than 20 representatives were defeated for re-election. 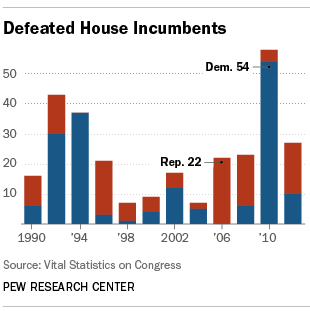 In August 1992, only about half (48%) of registered voters in the Post/ABC poll said they were looking around for another candidate. That November, 43 incumbents were defeated, the most in nearly two decades. And just ahead of the 2010 elections, which unseated 58 representatives (54 of them Democrats, which President Obama called a “shellacking”), 55% of voters told Pew Research surveyers they wanted their representative to keep his or her job.