When Indians go to the polls a few weeks from now they will decide who will lead the world’s second most populous nation and 10th largest economy. The new government will face challenges reviving economic growth, curbing inflation, narrowing the gap between the rich and the poor and protecting Indians from domestic terrorism. Success or failure may determine whether more and more Indians emerge from poverty and whether India plays an ever greater role on the world stage. 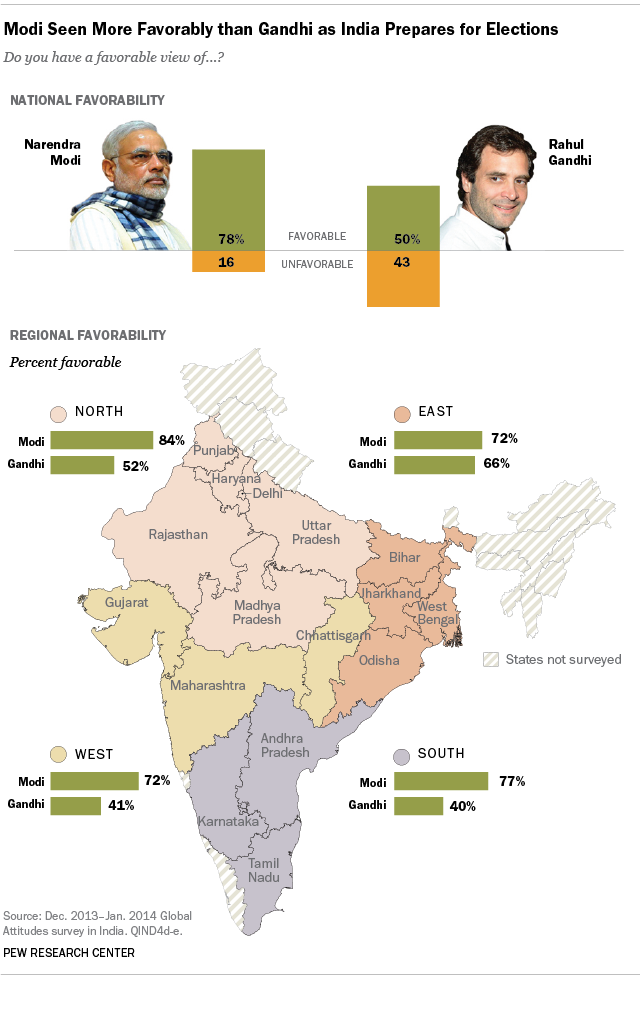 According to a new Pew Research Center survey conducted between December 2013 and January 2014, the Indian public, by a margin of more than three-to-one, would prefer the Bharatiya Janata Party (BJP) rather than the ruling Indian National Congress party to lead the next Indian government.

Nearly eight-in-ten Indians (78%) have a favorable view of Modi, compared with 16% who hold an unfavorable view.

Modi, who as chief minister of Gujarat has presided over strong economic growth and has been wooing voters by pointing to his track record as a leader who cuts red tape and attracts investment, is strongly popular in the northern states. But his support in the southern states, where historically the BJP has never fared well, is lower than in the northern states.

Overall, Gandhi is seen favorably by half of those surveyed and unfavorably by 43%. Gandhi’s regional support is strongest in the eastern part of the country, and is weakest in the south and west.

The Pew Research survey cannot gauge the level of support for either the BJP or Congress in particular constituencies. But it reveals a widespread desire among Indians for a change in leadership.

A bit about India’s political process: Indian voters will select 543 members of the Lok Sabha, the lower house of the national parliament. No single party has won a parliamentary majority since 1989, so recent governments have involved coalitions of smaller regional parties led by either the Bharatiya Janata Party (BJP) or the Indian National Congress party.

The new Lok Sabha will elect the prime minister, who will then name a cabinet. The new government can then stay in office for up to five years. But this new government will not be all powerful. In the Indian system, the central government’s power is shared with 28 state governments and seven territories.

There will be 788 million eligible voters in the upcoming election, including nearly 150 million who will have become eligible to vote for the first time since the last national election five years ago. In that 2009 parliamentary election voter turnout was 58%.