Super Bowl fans are heading into New Jersey on Sunday, where the championship game will be played outdoors in a cold-weather city for the first time. Whether it’s the TV ads, the halftime show or the athletic competition itself, the National Football League plans Sunday to draw a big audience. 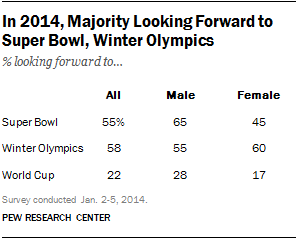 Last year’s Super Bowl drew an average TV audience of 108.7 million viewers to CBS and prompted some 26.1 million tweets, according to Nielsen. While there were more viewers in 2012 and 2011, the number of Super Bowl watchers in general has steadily increased since Super Bowl I in 1967.