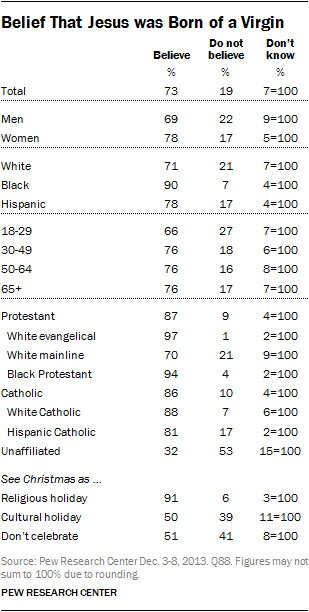 For most Americans, the Christmas story of Jesus’ birth still has real meaning. Nearly three-quarters (73%) of adults say they believe Jesus was born of a virgin, according to a new Pew Research survey on how Americans celebrate Christmas.

Majorities in the largest Christian religious groups believe in the virgin birth of Jesus, but the survey finds some variation. For example, fewer white mainline Protestants (70%) share this view than white evangelical Protestants (97%).

Even among Americans who have no specific religious affiliation, the story of Christ’s birth resonates with many. One-third (32%) of this group say they believe in the virgin birth. This might seem surprising, but according to a 2012 Pew Research poll, about one in five (18%) of those who have no religious affiliation describe themselves as religious, while nearly four-in-ten (37%) say they are spiritual but not religious; another four-in-ten (42%) say they are neither religious nor spiritual.

The new Christmas poll found an age gap on the question of Jesus’ birth. Two-thirds of adults under age 30 say they believe Jesus was born of a virgin, compared with three-quarters (76%) of those age 30 and older.

According to the new poll, roughly half of Americans (51%) see Christmas mostly as a religious holiday, while one-third (32%) view it as more of a cultural holiday. About half (54%) say they plan to attend religious services on Christmas Eve or Christmas Day this year.