Former Vice President Dick Cheney waded into a public dispute between his daughters on Monday, highlighting the debate in the Republican party over same-sex marriage.

The dispute began when daughter Liz Cheney, who is running for a Wyoming Senate seat, said she would not change her position on same-sex marriage despite her sister Mary’s marriage to a woman, saying “I believe in the traditional definition of marriage.” Mary responded, saying her sister was “on the wrong side of history.” 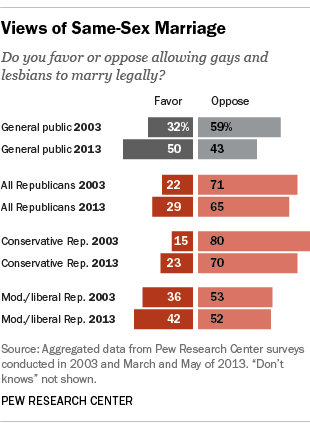 About half of Americans (49%) say they have a close family member or friend who is gay or lesbian, and Pew Research surveys find that knowing someone who is gay is associated with acceptance of gay marriage. For example, 14% of Americans said in a survey this past spring that they had changed their minds in favor of gay marriage. When asked why, 32% of those who had changed their minds said it was because they had friends, family or acquaintances who are gay or lesbian.