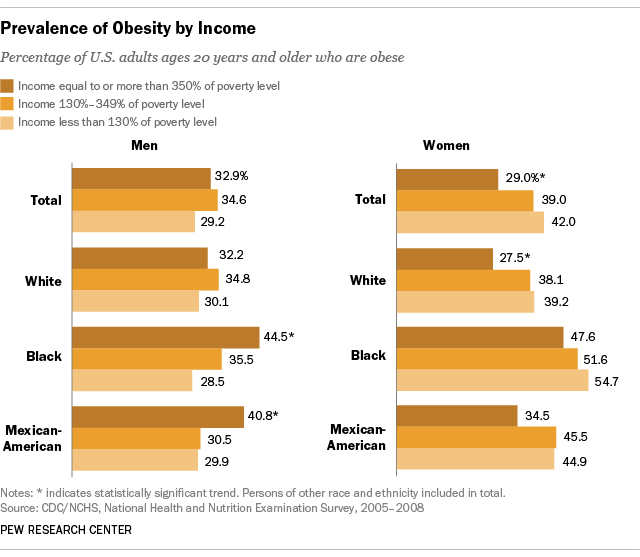 Americans overwhelmingly see obesity as a very serious public health problem, one with consequences not just for individuals but society as a whole, a new Pew Research Center report finds. But just who is obese? Research on obesity and socioeconomic status from the Centers for Disease Control and Prevention throws a few twists into the common wisdom that, in the U.S. at least, obesity is primarily a disease of the poor.

As we first reported back in 2006, Americans appear to have a sliding scale (so to speak) when it comes to weight, consistently underestimating their own relative to others’.  For instance, only 31% of people surveyed by Pew Research earlier this month said they were overweight; most of those said they were “somewhat” or “only a little” overweight, while 63% termed their weight “just about right.” But according to the CDC, 68% of Americans are overweight, and more than a third are obese. The CDC data come from the National Health and Nutrition Examination Survey, an ongoing program of studies that combines interviews with standardized physical exams, including height and weight measurements.

Obesity varies considerably depending on gender, race, ethnicity and socioeconomic factors. In 2010, CDC researchers (using data from 2005-08) found that among black and Mexican-American men, obesity increased with income: 44.5% and 40.8% of those men are obese, respectively, at the highest income level, compared with 28.5% and 29.9% at the lowest level. Beyond that, though, the researchers found little correlation between obesity prevalence among men and either income or education.

Among women, obesity was indeed most prevalent at lower income levels: 42% of women living in households with income below 130% of the poverty level were obese, compared with 29% of women in households at or above 350% of poverty. But the correlation was significant only for white women, though the trend was similar for all racial and ethnic groups studied. (Poverty thresholds are set every year by the Census Bureau, and vary by family size and composition. In 2008, for instance, the poverty threshold for a single person under 65 was $11,201; for a two-adult, two-child household the threshold was $21,834.)

The most recent government report, covering 2011-12, found that obesity was significantly more common among black women (56.8%) than black men (37.1%). There was far less obesity among Asian Americans than other racial/ethnic groups: 10.8%, compared with 32.6% for whites, 42.5% for Hispanics and 47.8% for blacks. However, body shape and normal build varies by gender, race and ethnicity, and members of different demographic groups can have more or less body fat, even at the same BMI. For instance, as the researchers noted, “at a given BMI, Asian adults may have more body fat than white adults.” 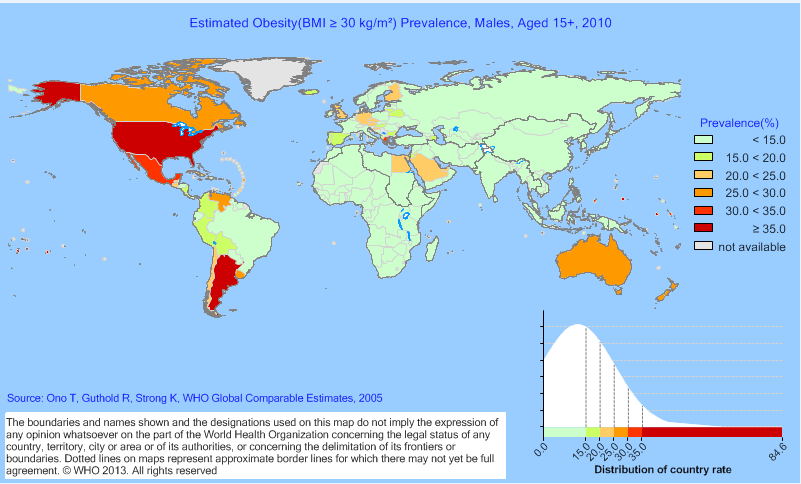 Globally, obesity is overwhelmingly a problem of developed rather than developing nations, and in few places more than in the United States. Using 2010 data, the World Health Organization estimated that 44.2% of U.S. males and 48.3% of U.S. females aged 15 and above were obese.