This weekend, top leaders in China plan to focus on a whole host of reforms, ranging from initiatives to open up the nation’s economy to addressing challenges such as corruption, environmental problems, and social issues. In our years of asking the Chinese questions about their views about the state of their country, here are their answers on key issues: 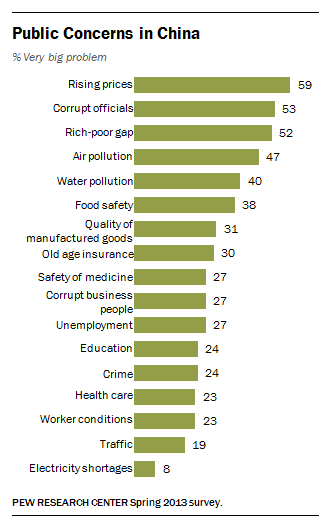 Inflation – Rising prices are seen as a very big problem by 59% in China, according to a spring 2013 Pew Research Center survey. When asked which is the issue most important for the government to address first, 53% of the Chinese public said inflation, while 26% named inequality and only 11% cited unemployment. Inflation shot up to 3.1% in September, making it a pressing issue for China’s Communist party elite.

Corruption – Just over half of Chinese (53%) said that corrupt officials were a very big problem, according to the spring 2013 survey. The recent conviction of Bo Xilai and accounts of personal enrichment among former Communist leaders from China’s state-owned enterprises (SOEs) make the issue even more salient. Many observers believe SOE reform will be one of the top goals of this weekend’s leadership meeting. It is estimated that 35% of business activity and 43% of profits in China result from SOEs.

Inequality – Just over half in 2013 (52%) said that the gap between the rich and the poor was a large concern, according to the spring survey. Earlier this year, Chinese officials released an updated Gini coefficient of .474 (a measurement of inequality where 0 represents perfect equality and 1 equals maximum income inequality), down from a peak of .491 in 2008. Many were skeptical of the accuracy of this rating, but Pew Research polling shows the number concerned about inequality has fallen since 2008, when 72% said it was a very big problem.

Social issues – Lurking in the background of this year’s plenum are increasing concerns about ethnic tensions within China. Recent attacks in Beijing and Taiyuan have highlighted the issue and there have been tough questions from abroad for the Chinese government on its treatment of its own citizens. A spring Pew Research survey found that only a median of 36% across 38 countries surveyed in 2013 said the Chinese government respected the personal freedoms of its people. Furthermore, China had among the worst rankings on government restrictions of religion, according to the Pew Research Center’s Religion & Public Life Project Government Restrictions Index.