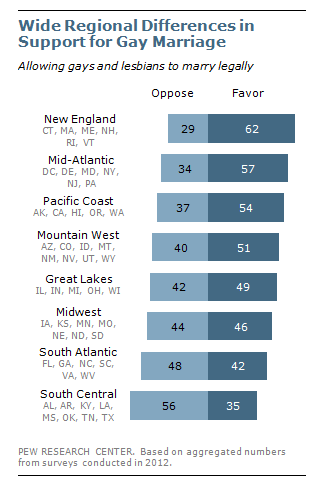 Last month’s state court ruling legalizing same-sex marriage in New Jersey, and Gov. Chris Christie’s decision today to drop the state’s challenge to the decision, are the latest in a string of developments that have come in the wake of the U.S. Supreme Court’s landmark decisions on same-sex marriage. Indeed, since the high court handed down the rulings in June 2013 – striking down part of the federal Defense of Marriage Act (DOMA) and effectively overturning California’s same-sex marriage ban – gay rights advocates have stepped up their efforts to end prohibitions on gay marriage in at least 20 states.

Virtually all of the recent court challenges have argued that the state bans on same-sex marriage are incompatible with the Supreme Court’s DOMA decision (U.S. v. Windsor). New Jersey is a good example. Same-sex couples in the state argued that Windsor, which requires the federal government to recognize same-sex marriages, in essence extends this mandate to New Jersey. On Sept. 27, a judge agreed and ordered the state to allow same-sex marriages beginning Oct. 21. Christie’s efforts to get the New Jersey Supreme Court to stay the ruling, pending an appeal, failed when the justices unanimously decided to allow the earlier decision, and the Oct. 21 deadline, to stand.

The next court test is likely to happen in New Mexico on Oct. 23, when the state Supreme Court will hold a hearing on whether the Windsor decision requires the state to begin issuing marriage licenses to gay and lesbian couples. New Mexico is in a unique position because it is not one of the 35 states that currently bans same-sex marriage nor is it one of the 14 states that allow it. A decision is expected late this year or in early 2014.

Meanwhile, gay-rights advocates are pursuing changes in legislatures as well. The first major legislative action is slated to occur on Oct. 28 in Hawaii, when that state’s legislature returns for a special session aimed at passing a measure legalizing same-sex marriage. The bill is likely to have sufficient support to pass in both chambers and be signed by Gov. Neil Abercrombie, who publicly supports gay marriage and who initiated the call for the special session, according to news reports.

In the South Central region, where 56% express opposition to same-sex marriage, and the South Atlantic region (48% opposed) – all states currently enforce laws prohibiting gays and lesbians from marrying. But there are active challenges to the bans in seven of the 14 states in these regions – Arkansas, Kentucky, Louisiana, Mississippi, Oklahoma, Virginia and West Virginia.