While a Pew Research survey conducted this month found public trust in the federal government nearing a record low, most Americans have a favorable view of many government agencies and departments and also regard federal workers positively.

Except for the Internal Revenue Service. 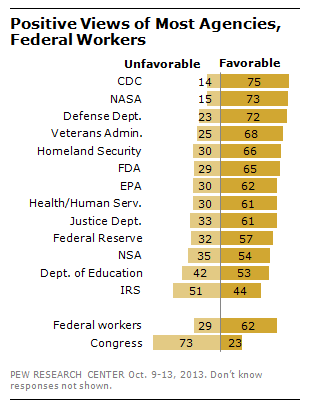 Nine of the 13 federal agencies and institutions included in the survey are viewed favorably by 60% or more of the public.  But among all of them, the IRS was the only one rated more unfavorably than favorably by the public, with 51% expressing a negative view compared with 44% who had a favorable one.

By comparison, five agencies received favorable ratings from two-thirds or more of the public: The Centers for Disease Control, or CDC (75% favorable), NASA (73%), the Defense Department (72%), the Veterans Administration (68%) and the Department of Homeland Security (66%).

Republicans have the least favorable views of the IRS, with only 23% regarding it positively. That compares with 65% of Democrats and 40% of independents.