Pope Francis already has made headlines for several reasons in his six months as pontiff, but an interview that became public Thursday may contain some of his most attention-grabbing comments.

The pope said that the Roman Catholic church cannot be “obsessed” with imposing certain doctrines and that he wants to “find a new balance.” Although he did not directly mention abortion, gay marriage and contraception in that immediate context, he had referred specifically to those three issues earlier.

“We cannot insist only on issues related to abortion, gay marriage and the use of contraceptive methods. This is not possible,” Francis told Antonio Spadaro, editor in chief of La Civiltà Cattolica, the Italian Jesuit journal. 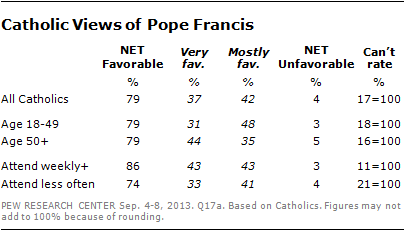 A recent Pew Research Center survey – conducted before these comments were published – shows that most U.S. Catholics view Pope Francis favorably. About eight-in-ten (79%) say they have a favorable view of Francis, while just 4% view him unfavorably. That’s roughly equivalent to the high water mark for Pope Benedict XVI, who was rated favorably by 83% of U.S. Catholics in April 2008 following his visit to the U.S. About three-quarters of U.S. Catholics (74%) rated Benedict favorably in February 2013 immediately following the announcement of his resignation.