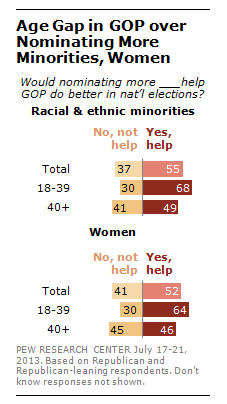 Here’s some advice from younger Republicans for improving the party’s fortunes in national elections: Nominate more minority and female candidates.

A recent survey of Republican and Republican-leaning adults about the GOP’s future found stark age differences in opinions on the question of whether more diverse nominees would help the party perform better in future elections. (Some of the findings in this post were not included in the original report.)

Based on surveys conducted over the past year, one-third of all Republicans and GOP leaners are under age 40. Those in the younger group are less likely to call themselves Republicans – 59% are Republicans while 41% simply lean toward the GOP – than those in the older group (65% Republicans vs. 35% leaners). Also, fewer younger Republicans and leaners describe their political views as conservative (54% vs. 67% of older Republicans) and fewer agree with the Tea Party (26% vs. 43%). 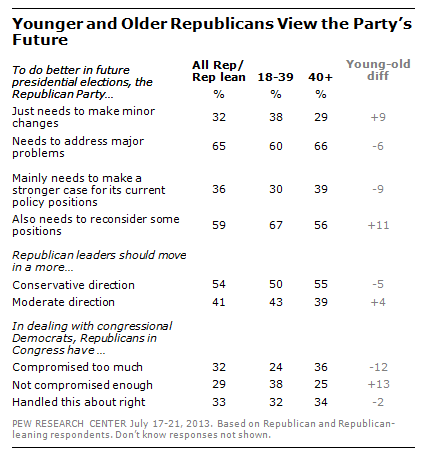 Despite these ideological differences, younger and older Republicans generally agree that the GOP needs to address major problems – rather than just make minor changes – in order to be competitive in the future.

And there are no significant age differences over the party’s future ideological direction: 50% of Republicans under 40 and 55% of those 40 and older favor their leaders moving in a more conservative direction.

More say press is too easy on Trump than said so of Romney, McCain