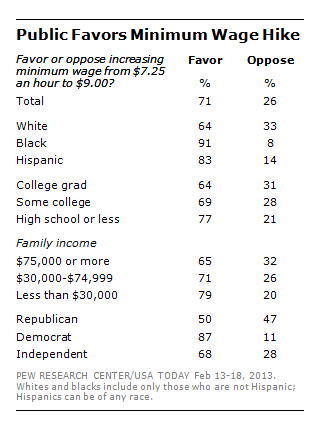 Proposals to raise the minimum wage, both nationally and locally, have gotten increased attention in recent weeks. President Obama renewed his call for a higher federal minimum wage during a speech on the economy at Knox College in Illinois last month. And fast-food workers in several cities have held one-day strikes or walkouts to demand higher minimum wages locally.

The proposal faces stiff opposition in Congress from Republicans, particularly in the House. After Obama called for raising the minimum wage in his State of the Union speech, House Speaker John Boehner said

“>the action would cost jobs among lower-income workers (video from AP).

Within the GOP base, there are sharp educational and income differences over increasing the minimum wage. Six-in-ten (60%) Republicans and Republican-leaning college graduates oppose the proposal, while about the same percentage of Republicans who have not completed college (58%) favor it. 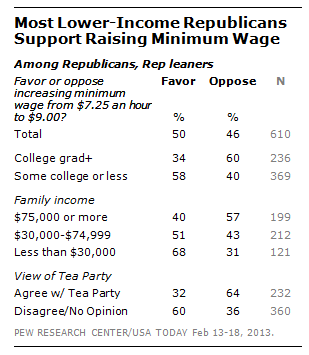 Tea Party Republicans (32% favor) are far less likely than those who do not agree with the Tea Party (60%) to support raising the minimum wage.

Share this link:
Danielle Gewurz  is a Research Analyst at the Pew Research Center for the People & the Press.
POSTS BIO EMAIL

Making more than minimum wage, but less than $10.10 an hour