In the economic-policy speech he’s scheduled to deliver Wednesday at Illinois’ Knox College, President Obama is expected to re-emphasize his “middle-out” view of the U.S. economy — that growth and prosperity derive from a strong middle class. Unfortunately, it’s been awhile since the American middle class felt strong.

As the Pew Research Center summed it up nearly a year ago, middle-class Americans are “fewer, poorer, [and] gloomier” after enduring a “lost decade” of stagnant incomes, shrinking wealth and greater financial stress and uncertainty.

And though some top-line economic indicators — unemployment, housing prices, the stock market — have improved since that time, Americans in general aren’t feeling much better about the economy. 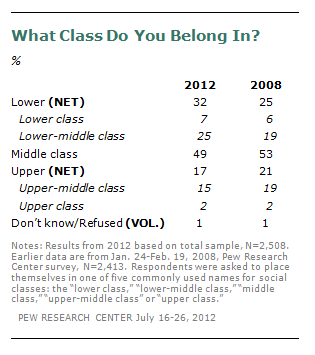 For starters, fewer Americans described themselves as “middle class” in 2012 than four years earlier: 49%, compared with 53% in 2008. And the share describing themselves as “lower” or “lower-middle” class rose over that time, from 25% to 32%.

Within self-described members of the middle class, the overwhelming sense that maintaining a middle-class lifestyle is harder today than a decade ago cuts across age, gender, partisan, educational and racial/ethnic divides. (Though whites and people ages 50 to 64 were even more pessimistic than other subgroups, last year’s Pew Research report found.)

However, the middle-class respondents were somewhat more sanguine about their personal situations. About equal percentages said they were more financially secure now than 10 year earlier (44%) as said they were less secure (42%); blacks and younger adults were most likely to say they had made progress over the past decade.

And who’s responsible for the difficulties of the middle class? While Congress gets the most votes, with 62% assigning it “a lot” of the blame, the Pew Research report found plenty of blame to go around. The one exception: Middle-class people themselves, with just 8% assigning their own socioeconomic group “a lot” of blame, and 47% saying they weren’t to blame at all. 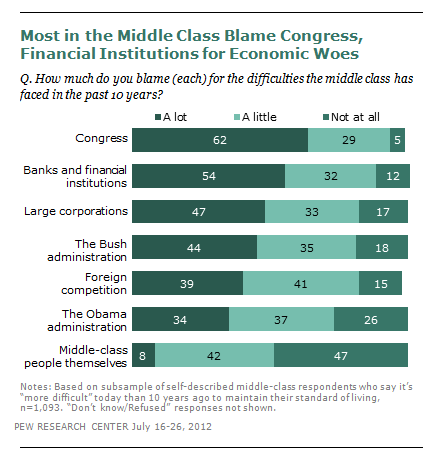