Liz Cheney’s decision to challenge Sen. Mike Enzi for re-election sets up a primary contest where the main difference appears to be generational, not ideological: Cheney, the 46-year-old daughter of former Vice President Dick Cheney, and Enzi, Wyoming’s 69-year-old third-term senior senator, both are conservative Republicans.

“I think that part of the problem in Washington today is seniority,” Cheney told the Associated Press Tuesday. “I think it’s time for a new generation, for a new generation to come to the fore. I don’t see seniority as a plus, frankly.” Enzi, for his part, told CNN Wednesday: “I’m absolutely not too old to be senator. I’m the median age.” 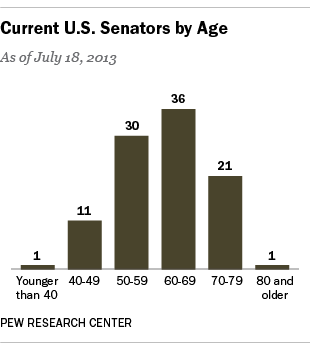 Well, not quite. We figured out the ages of all 100 sitting senators as of Thursday (Colorado Sen. Mark Udall’s 63rd birthday, incidentally), and calculated their median age at 62 years, 2 months. (The average age, as of Thursday, was 61 years, 9 months.)

At 69 years 5 months, Enzi is the 25th-oldest senator. The oldest, Dianne Feinstein of California, turned 80 last month; the youngest, Christopher Murphy of Connecticut, turns 40 on Aug. 3.

There’s been an influx of younger senators in recent years — including Marco Rubio of Florida (42), Kelly Ayotte of New Hampshire (45) and Kirsten Gillibrand of New York (46). Eighteen of the 26 senators who are currently 55 or younger were elected or appointed since 2010.

We didn’t calculate medians for prior years, but according to a piece earlier this year in Slate, the Senate’s average age at the beginning of the 111th Congress in 2009 was 63; it edged down to 62 by 2011. The youngest Senate in recent history, by Slate’s reckoning, took office in 1981, after a Republican tide swept in many new senators and dropped the average age to less than 53.

The Senate may get younger still over the next election cycle. After New Jersey Sen. Frank Lautenberg died last month at the age of 89, he was replaced temporarily by Jeff Chiesa, who recently turned 48; Newark Mayor Cory Booker, 44, is widely considered the favorite to win the special election scheduled for October. And of the seven senators who’ve announced they won’t be running again in 2014, all but one (Mike Johanns of Nebraska) is older than 65.