The surge in the stock market this year – restoring much of the wealth that had been lost during the financial meltdown that struck in 2007 – has masked the unevenness of the recovery among Americans since 2009. A Federal Reserve board analysis this week spelled out the reason: stock market wealth is held by a relatively small number of the most-affluent and, as a result, “most families have recovered much less than the average amount.”

This factor is also made clear in Pew Research Center surveys and analyses that show which Americans do or don’t own stocks, and how this dividing line has widened the wealth gap in the period since the recovery began to take hold in 2009.

A Pew Research survey in March found that 53% of Americans say they have no money at all invested in the stock market, including retirement accounts.

However, while stock owners have seen the value of their investments rise, their views on the national economy remain gloomy and are no different than the views of non-stock owners.

Overall, 17% of stockholders rate the national economy as only fair or poor. Similarly, just 15% of those without money in the market rate the economy positively.

And owning stocks also has no impact on economic optimism. Just 23% of stock owners say the national economy will be better in a year, compared with 26% of those who do not own stocks. 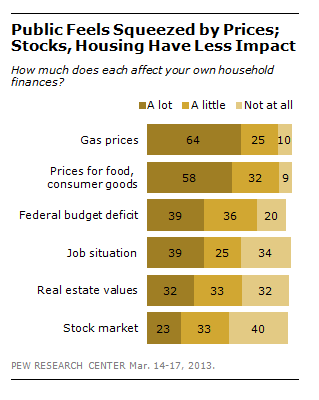 Our March survey found that most Americans ranked the stock market last among six factors affecting their finances. Nearly two-thirds (64%) said gas prices had the greatest impact on their wallets, followed by prices for food and consumer goods (58%), the federal deficit (39%), the jobs situation (39%) and real estate values (32%). Only 23% cited the stock market as an important factor.

The demographic differences when it comes to which Americans have a big stake in the market – and the biggest difference is family income – have also been behind a growth in the so-called wealth gap since the end of the recession.

A Pew Research Center study in April found that the upper 7% of Americans as far as mean net worth saw their wealth rise an estimated 28% while the meant net worth of households in the lower 93% dropped by 4% between 2009 and 2011.

Driving this was the fact that affluent households have far more of their money in stocks and other financial holdings, and they reaped the benefits of the rise in the markets. Less affluent households typically have their wealth concentrated in the value of their homes, and while the housing market has started to rebound, it did not see the kind of surge that the markets had.

This finding was underlined by a report issued this week by the Federal Reserve in a section analyzing “How Much Household Wealth Has Been Recovered,” (p. 14).

Of the total recovery, 62% of the gain was due to increased stock market wealth, the analysis said. “Stock wealth is unevenly held, with the vast majority of stocks owned by a relatively small number of wealthy families. Thus, most families have recovered much less than the average amount.”

“A conclusion that the financial damage of the crisis and recession largely has been repaired is not justified,” the report stated.