Veterans who have served in the post-9/11 era have a more positive view than the general public about the overall worth of the Afghanistan and Iraq wars and the tactics the military has used to wage them. Even so, in a Pew Research Center survey conducted in 2011, only one-third (34%) of these recent veterans said that both wars have been worth fighting; nearly as many (33%) said neither conflict had been worth the costs. 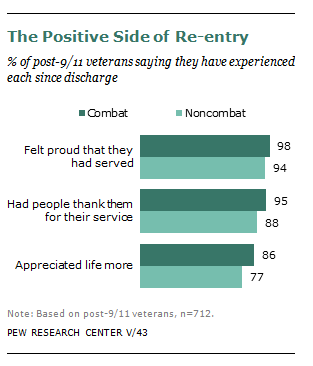 Looking at each conflict individually, 50% of post-9/11 veterans said the decade-old war in Afghanistan has been worth fighting, while 44% viewed the 8½-year-old conflict in Iraq the same way.

However, despite those mixed views and the hardships veterans have endured in the service and in their re-entry into civilian life, they have positive views of their experience.

Post-9/11 veterans are proud of their service (96%), appreciate life more (82%) and believe that their military service has helped them get ahead in life (74%). Large majorities say that serving in the military has been either very or fairly useful in helping them become more mature (93%); gain self-confidence (90%); learn to work with other people (90%); and prepare for a job or career (72%). Some 92% say that since they got out of the service, someone has thanked them for serving.

The post-9/11 veterans served at a time when the military has become the most respected institution in the nation, according to the 2011 survey. Veterans from earlier eras are mindful of this shift in public opinion. Among veterans who served before 9/11, 70% say that the American public has more respect for those who serve in the military now than it did at the time of their own service. Read more