Ahead of Japanese Prime Minister Shinzo Abe’s visit to Washington, 62% of Americans say the United States can trust Japan a great deal or a fair amount. About a third (32%) answer “not too much” or “not at all.”

That puts trust in Japan near the top among nine countries tested in a spring 2012 survey. Nearly eight-in-ten Americans (78%) say they think the U.S. can trust Britain a great deal or a fair amount. About six-in-ten (59%) say the U.S. can trust France and 56% say the same about Israel.

On the other hand, just 10% say the U.S. can trust Pakistan a great deal or a fair amount, while 25% say this about Saudi Arabia and 26% about China.

Five groups of experts surveyed in 2012 also show high levels of trust in Japan. All of the retired military and news media experts surveyed say the U.S. can trust Japan at least a fair amount. And nearly all among government experts (96%), scholars (96%) and business people (94%) agree. Read more

For more, see “How America and Japan See the World.” 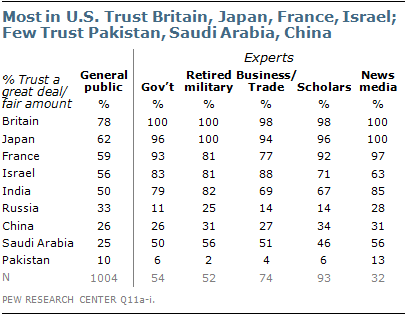