A third (33%) of Americans say there are guns, rifles or pistols in their home, which is little changed from recent surveys.

While gun owners, unlike the public at large, oppose gun control measures such as banning assault-style weapons, a big majority of gun owners (85%) support making private gun sales and sales at gun shows subject to background checks. That matches the level of support among the general public for doing this.

By 60% to 37%, gun owners also favor the creation of a federal government database to track all gun sales, which is also favored by the overall public (67% to 30%). Read more 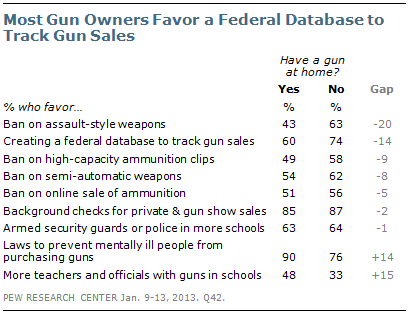