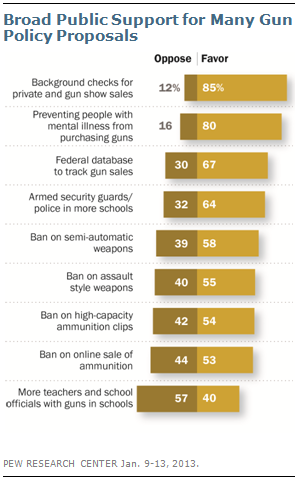 While the issue of gun control remains divisive, there are clear areas of agreement when it comes to a number of gun policy proposals. Fully 85% of Americans favor making private gun sales and sales at gun shows subject to background checks, with comparable support from Republicans, Democrats and independents.

The bipartisan consensus breaks down when it comes to other proposals. Two-thirds of Americans (67%) favor creating a federal database to track gun sales, but there is a wide partisan divide between Democrats (84%) and Republicans (49%).

A smaller majority (55%) favors a ban on assault-style weapons; Democrats (69%) also are far more likely than Republicans (44%) to support this. Similar partisan divides exist when it comes to banning high-capacity ammunition clips or the sale of ammunition online.

On proposals dealing with school safety, 64% overall favor putting armed security guards and police in more schools. On the other hand, 57% oppose more teachers and school officials having guns. That option is particularly divisive across party lines: 56% of Republicans would like to see more teachers and school officials armed, compared with just 23% of Democrats. Read more