As President Obama travels to Nevada to speak about immigration reform and a group of senators propose a framework for bi-partisan legislation, a plurality of Americans favor a balanced approach.

When asked last June about priorities for dealing with illegal immigration, 42% said they want an approach that balances both tougher enforcement and creating a path to citizenship for the more than 11 million immigrants who are in the country illegally.

Most African Americans (59%) and a plurality of whites (41%) said that both enforcement and creating a path to citizenship should be given equal priority. One-third (33%) of whites said that better border security and enforcement of immigration laws should be the priority. Read more 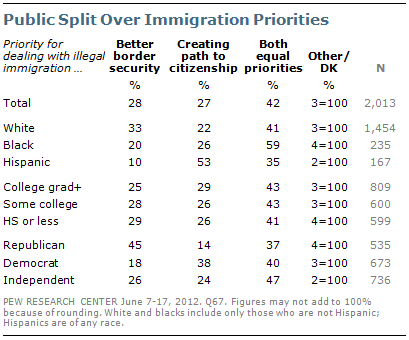 Trump voters want to build the wall, but are more divided on other immigration questions

Unauthorized Immigrants: Who they are and what the public thinks

On immigration, Republicans favor path to legal status, but differ over citizenship