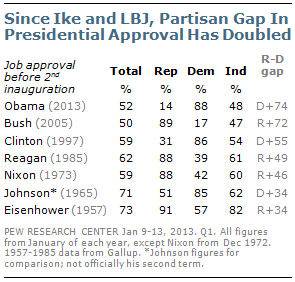 As Barack Obama takes the oath of office today, he is in a relatively strong position heading into his second term. His job approval now stands at 52% — among the highest since his first year in office. A year ago, 44% said they approved of the way Obama was handling his job as president.

At the same time, Obama’s job approval is lower than other presidents at the start of their second terms dating back to Dwight Eisenhower, with the exception of George W. Bush. Obama’s 52% job approval is about the same as Bush’s was in January 2005 (50%).

Just 14% of Republicans approve of the way Obama is handling his job as president, compared with 88% of Democrats, a 74 percentage point difference. Republicans’ approval of Obama is similar to the 17% of Democrats who approved of Bush’s job performance in January 2005. Both are far lower than the ratings their predecessors received from members of the opposite party. In addition, independents rate Obama and Bush lower than most other presidents at their start of their second term. Read more