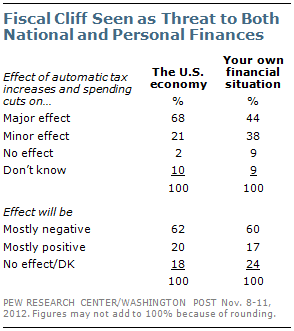 Nearly seven-in-ten (68%) of Americans say there would be a major effect on the U.S. economy from the automatic tax increases and spending cuts that would be triggered if the White House and lawmakers failed to reach a deal to avoid the “fiscal cliff.” Almost as many (62%) said the impact would be mostly negative.

A smaller number (44%) of the overall public – including those who believe the effect would be minor — say the impact of the tax hikes and spending cuts would have a major effect on their own financial situations. However, among those Americans who believe the effects on the economy will be mostly negative, 60% say they expect an adverse impact on their own financial situation if no deal is reached.