Sizeable majorities of both the app and web groups agreed to take part in the study, and majorities of those who signed up actually participated in one or more of the individual surveys. The web group outperformed the app group in terms of cooperation rates and responses rates, both overall and to each of the 14 surveys. This is perhaps due to the fact that panelists assigned to the web treatment knew they could and did respond via smartphone, tablet, laptop or desktop while the app panelists were restricted to a mobile device.

In total, 80% of those who agreed to participate using an app actually downloaded the app. This corresponds to 61% of those invited. 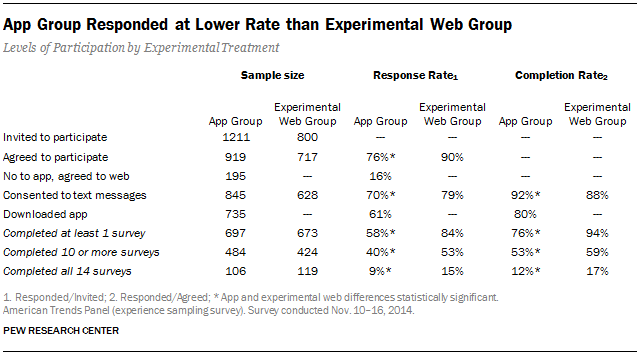 Looking at the surveys across the field period, the app response rate was lower than the experimental web completion rate at every day and time. Additionally, we see a lower response rate on the first day than the second day for both modes, except when comparing the afternoon web surveys of the first two days. Of the subsequent days, each day is not statistically significantly higher or lower than the day before. 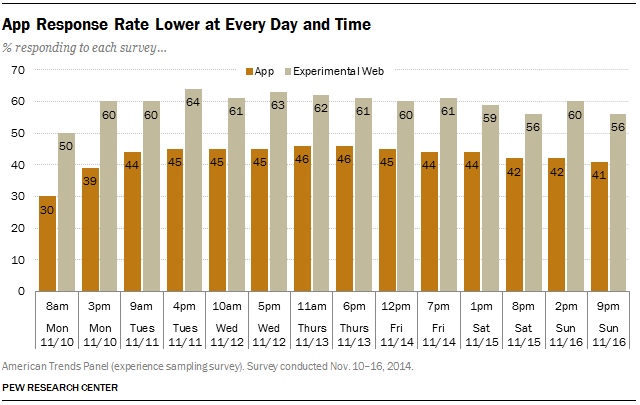 Combining all completed surveys by treatment across all days and times, we looked at when each completed survey was initially accessed within the two hour survey window. We find that a plurality of both the app and experimental web surveys was initially accessed within the first two minutes after the invite was dispatched, but a higher percent of the app surveys were accessed within that time frame compared to the experimental web group. Perhaps the push notifications the app group received, in addition to the text messages and emails both groups received, accounts for some of this increase. It could also be related to the demographics of the app group, discussed below. 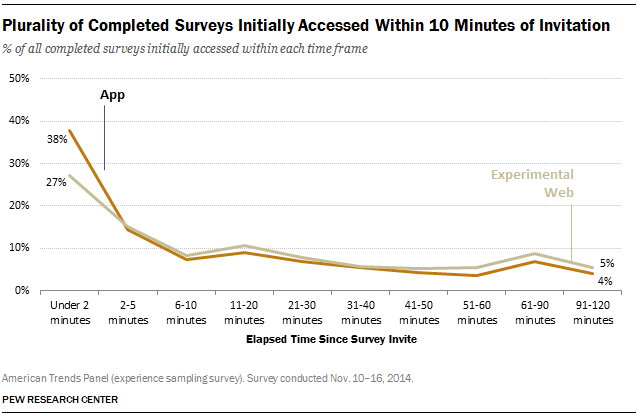 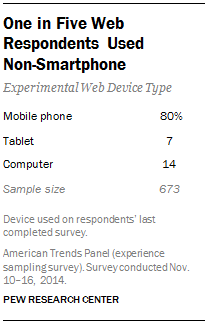 The original research plan called for capturing the device used to complete each survey, for each panelist regardless of experimental treatment. However, due to an oversight, the device information for the experimental web group was captured for only the respondent’s last survey. Keep in mind that for some respondents their last survey could have been the second survey and for others the 14th survey. While the vast majority (80%) completed their last survey on a mobile phone, 7% used a tablet and 14% used a desktop or laptop computer. 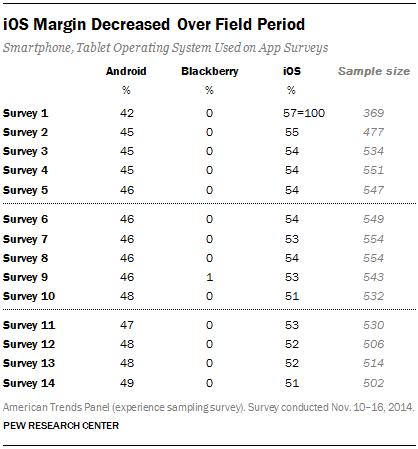 The app group’s smartphone or tablet operating system was captured for every survey. iOS users (iPhone, iPad) outnumbered Android (smartphone, tablet) users 57% to 42% in the initial survey, a ratio that gradually narrowed to 51% to 48% by survey 14.

The unweighted demographic composition of the study’s participants and the weighted full sample of smartphone users from the October wave of the panel were very similar, suggesting that either experimental group could have been used to represent all smartphone users. However, app respondents represented all smartphone users slightly better than did experimental web respondents, in the sense that they were more likely to be young and not registered to vote. There were some relatively modest demographic differences between the app and web groups. For example, in comparing app vs. web for both those who agreed to participate and those who actually responded, the profile of the app group was younger, more likely to be from the Midwest and less likely to be registered to vote compared to those who agreed to participate and those who responded in the experimental web group. 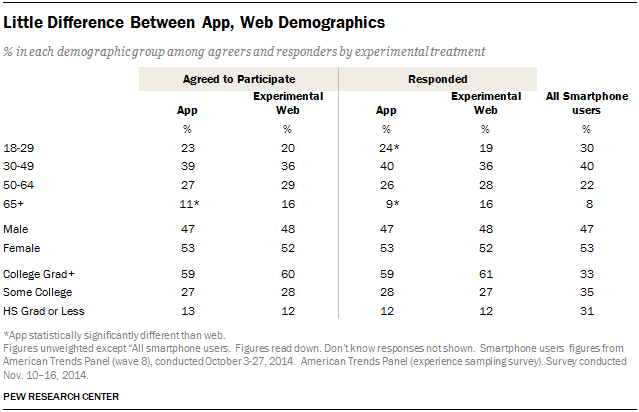 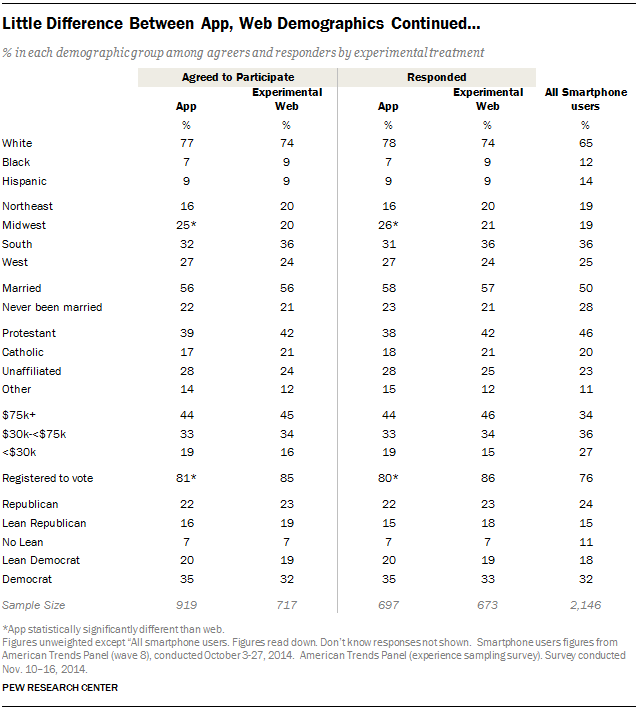 In addition to tabular comparisons of cooperating and non-cooperating groups, researchers conducted a multivariate analysis of the factors predicting whether an individual responded as a way to test whether panelists invited to the app treatment were less likely to respond regardless of demographics. The dependent variable was whether an invited panelist responded to any of the 14 follow up surveys or not. The base is thus all invited, not just those who agreed to participate.

The model controlled for age, gender, education, race and ethnicity, census region, marital status, religiously affiliated or not, registered to vote, political party affiliation, treatment group (app vs. experimental web) and two-way interactions between treatment and select demographics (age, education and gender). The interactions were not significant and thus were dropped from the model. 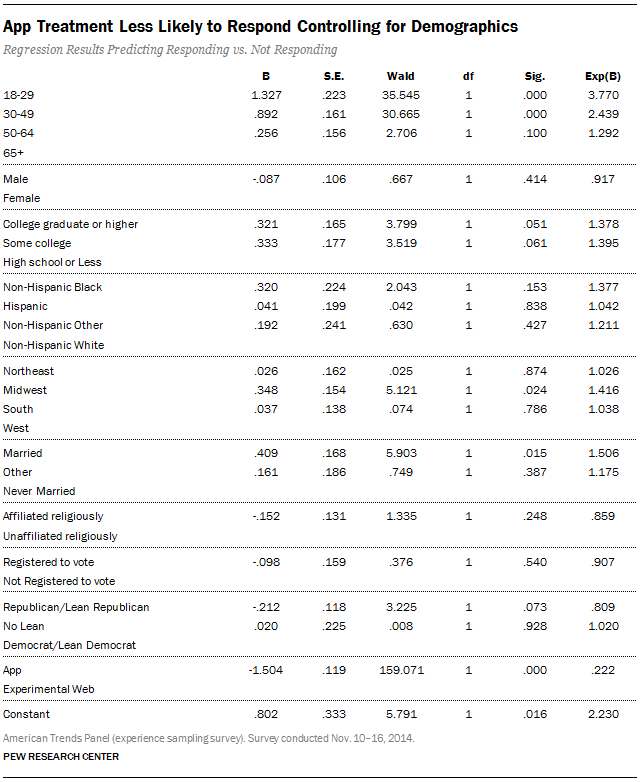 Of greatest interest, of course, are the substantive questions in the study. Do the app and web versions yield different results for the questions at the heart of the research? The answer is no. The weighted1 substantive results from the app and the web groups do not differ. The app and the web groups were each separately weighted to targets for all smartphone users. Responses were compared for which activities respondents did at least once over the week, in which location, for what purpose and how it made them feel. On only one item out of 34, “taking pictures or videos,” was the app group significantly different from the experimental web group (app respondents were less likely to report having done so). Thus, this study suggests the choice of using an app or a web implementation of the survey would likely not affect the results of a future study attempting to represent all smartphone users at least on this topic. 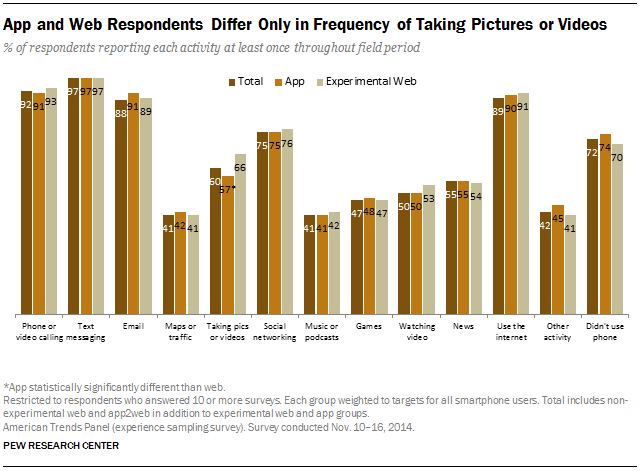 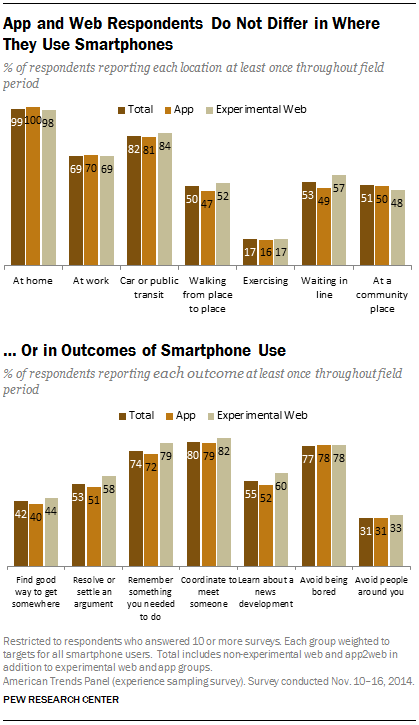 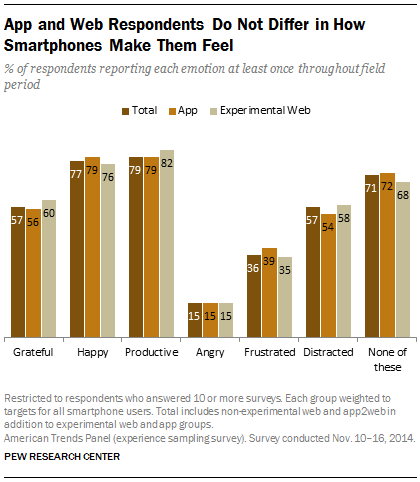