Q. I try very hard to keep abreast of current events, and was therefore disappointed that I did not answer one of the questions on your online political news quiz correctly. Question No. 11 asks: “On which of these activities does the U.S. government currently spend the most money?” Your answer is national defense. However, I am under the impression that we spend the most money on entitlement programs and on interest on national debt. How have I been so misled?

Before we get to your question, please don’t feel disappointed by your test performance. When we asked this current set of news quiz questions to a national sample of adults in a November 2010 survey the average American answered less than half of them correctly. Furthermore, only 39% of Americans knew the right answer to this specific question about the federal budget. Having answered 11 of 12 questions correctly, you should certainly still consider yourself up to date with current events.

As for the specific question you emailed about, question No. 11 of the online news quiz asks the quiz taker to select from among four possible programs (education, interest on the national debt, Medicare and national defense) the activity the U.S. government spends the most money on.

To help answer this question, pasted below is a chart created by the Office of Management and Budget (OMB) in August 2009 for the 2010 budget which illustrates how the federal government spends its money. (The OMB chart has also been reproduced on the website of the New York Times). 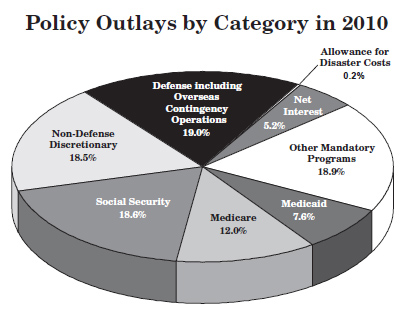 As you can see, the spending on national defense accounted for 19% of the federal budget in 2010. This is more than was spent on the other three programs you can choose from on the news quiz: Medicare (12%), interest on the debt (5.2%) and total non-defense discretionally spending (18.5%) — which includes all education spending plus numerous other programs.

You are correct that the government spends more on entitlements (Social Security plus Medicare plus Medicaid plus other mandatory programs) than national defense, but remember, the question asked you to choose which among the four specific programs received the most money. Taken individually, none of the government’s mandatory-spending programs receives more money than national defense. Social Security is close, but that was not one of the answer options.

Also, while interest on the debt is substantial — it accounts for nearly as much money as Medicaid — the spending on interest is still well below the amount allocated for national defense.

The chart above, however, does not contain the most recent federal budget data released by the government. Pasted below is a similar chart from the most recent OMB report — Budget of the U.S. Government: Fiscal Year 2011 (PDF). You can find the chart in the section titled “Summary Tables,” and a host of other information about government spending in the full report. While this chart, unfortunately, does not contain the percentages of government spending by category, you can clearly see that the outlays for national defense (labeled “security discretionary”) are again clearly larger than the outlays for Medicare, net interest and all non-security discretionary spending (which includes a small slice for education). 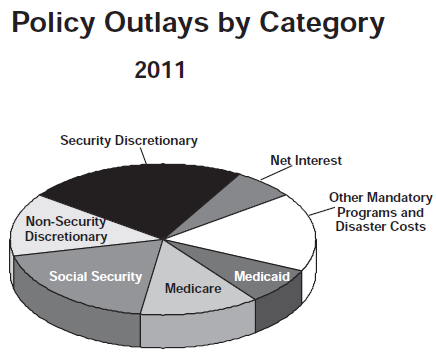 For a closer look at how the federal government spends its money, you may find these interactive graphics produced by the Washington Post and New York Times informative.