Pew Research Center’s final 2010 pre-election survey finds the Republican Party continuing to hold a solid lead in preferences for Tuesday’s midterm elections. The poll, conducted Oct. 27-30 among 2,373 registered voters, including 1,809 voters considered the most likely to vote, shows that 48% of likely voters say they will vote for the Republican in their district, compared with 42% who favor the Democratic candidate. 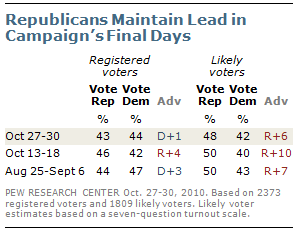 The size and consistency of the probable Republican margin suggests that the party will win a large enough share of the popular vote nationwide to recapture control of the House of Representatives, barring a remarkable last-minute Democratic surge. A party’s share of the popular vote and the number of seats it wins has been highly correlated in recent midterm elections.

In addition, the poll finds that the judgments of voters who are still uncertain or undecided do not favor either party. About as many likely voters say they lean toward a Republican candidate as toward a Democrat (3% each). And an analysis of undecided voters — 7% of all likely voters — shows no clear signs of their likelihood of favoring one party over the other by a significant margin.

Many of the patterns apparent throughout the 2010 campaign remain clearly evident in its final days. First, the Republicans enjoy a substantial engagement advantage. The GOP’s overall lead is only evident when the sample is narrowed to likely voters. Among all registered voters, preferences are about evenly divided — 44% Democrat, 43% Republican. 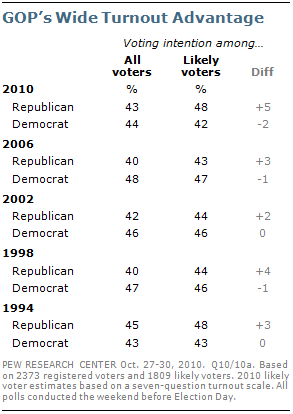 This represents one of the largest gaps in preferences between all voters and likely voters ever recorded in Pew Research Center surveys. As was the case earlier in the campaign, this is more a consequence of unusually high engagement among Republicans than disengagement among Democrats. Since September, a growing number of Democrats say they have given a lot of thought to the election, but they still lag Republicans by a wide margin. The current levels of Democratic engagement are fairly typical for a midterm election, though they are somewhat below what they were in 2006, when the party regained control of Congress.

Second, the engagement gap notwithstanding, the Republicans owe much of their lead to strong backing from independents and other non-partisan voters. As in previous polls, likely independent voters favor GOP candidates by a wide margin — currently, 45% to 32%. Shortly before the 2006 election, independents backed Democratic candidates by a 42%-to-35% margin. 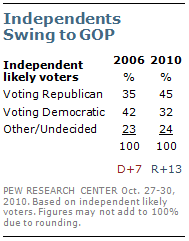 Third, compared with 2006, the GOP has made gains among many segments of the electorate, but especially men, voters ages 65 and older, and whites. The Democrats hold substantial leads only among African Americans, younger voters, those with low family incomes, union households and the religiously unaffiliated.

The pre-election survey indicates that overall voter turnout is likely to be as high this year as in 2006 – when 40% of age eligible voters cast a ballot – and higher than in previous midterms. Reflecting the growing popularity of early voting, 25% of likely voters say they have already voted, up from 18% in the final survey four years ago. Among those who have already voted, 49% say they have voted for a Republican candidate, while 41% have voted for a Democrat. 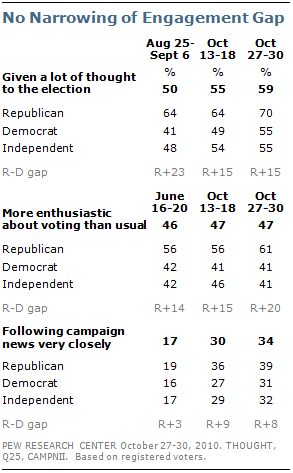 In the final weeks of the campaign, there are no signs that the large engagement gap favoring the Republican Party has narrowed. Republican voters continue to be far more likely than Democrats to say they have given a lot of thought to this year’s election (70% vs. 55%); more Republicans than Democrats say they are more enthusiastic than usual about voting in this year’s congressional election (61% vs. 41%); and Republicans are eight points more likely to say they are following campaign news “very closely” (39% vs. 31%).

These measures suggest that overall turnout is likely to be as high this year as in the 2006 midterm elections. Among registered voters, 59% say they have given a lot of thought to this election, comparable with the 61% who said this in the closing days of the 2006 campaign, and higher than the 52% and 49% who said this in 2002 and 1998, respectively. When it comes to campaign news, 34% are following very closely, again comparable with 2006 (33%) and substantially higher than in previous midterm elections. 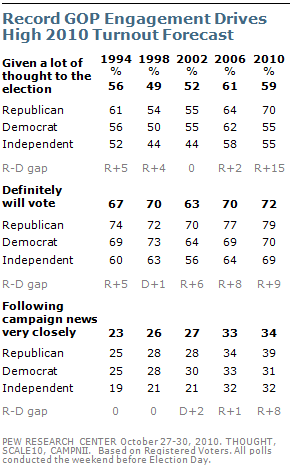 On many measures, the Republican engagement in 2010 is surpassing long-term records. Fully 70% of Republicans have given a lot of thought to this election, the highest figure recorded among either Republicans or Democrats over the past five midterm election cycles. And the differential between Republicans and Democrats is larger than ever previously recorded.

Because of this large engagement gap, the likely electorate is skewed toward voting blocs that favor the GOP. While 16% of all registered voters are younger than age 30, this age group makes up only 8% of likely voters due to their lower levels of interest and commitment to voting. Similarly, lower income Americans, who tend to favor the Democrats, make up a smaller share of the likely electorate due to their lower engagement levels. These patterns are not unusual; in most election cycles, turnout tends to be lower among a number of voting blocs that favor the Democratic Party. For a full profile of registered and likely voters in previous midterm election cycles, see pewresearch.org/politics.

Issues and the Vote 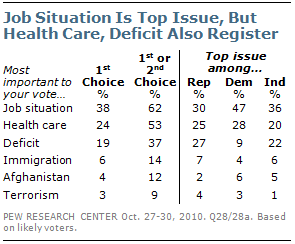 The economy has dominated much of the campaign debate this fall, but it is not the only issue on the minds of voters. Asked to choose among a list of six issues, 38% of likely voters selected the job situation as the most important issue in their vote. Nearly a quarter (24%) selected health care, and 19% picked the deficit first. Immigration (at 6%), Afghanistan (4%) and terrorism (3%) trailed the top three.

Health care is cited by a 53%-majority of voters when given the opportunity to cite two issues. The job situation remains the most frequently cited issue (at 62%). The deficit is mentioned by 37% of voters as one of the top two issues. 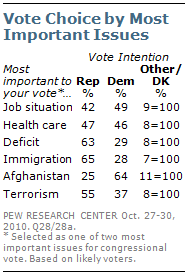 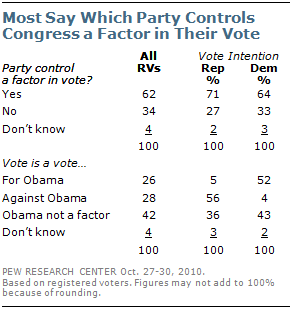 In what has turned out to be a nationalized election, about six-in-ten voters (62%) say that which party controls Congress will be a factor in their votes this year. More than half (54%) see their vote as a referendum on Barack Obama — but those people are divided; 28% see it as a vote against Obama, while 26% see it as a vote for the president. And a plurality (35%) say that national issues — as opposed to local concerns or a candidate’s character and experience — will make the biggest difference in how they vote. These numbers have changed only slightly in recent months. 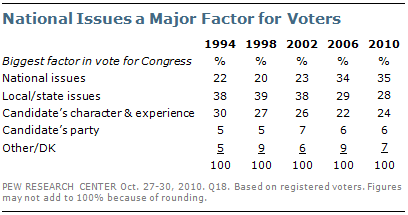 More than a third of voters (35%) say national issues will make the biggest difference in how they vote; 28% say local issues will and 24% say a candidate’s character and experience will. Those numbers are comparable with 2006, another highly nationalized election when control of Congress was in play. In 1994, however, a 38%-plurality said local and state issues were the biggest factors, 30% said a candidate’s character and experience were and just 22% named national issues as the biggest factor. 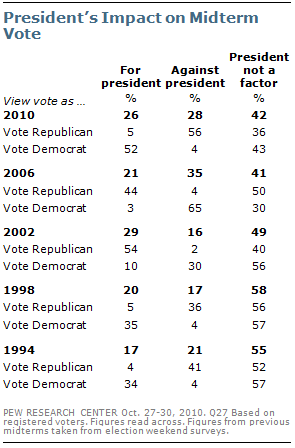 While just more than half say they see their votes as a statement about Obama (26% for, 28% against), about four-in-ten (42%) say the president will not be much of a factor in their votes. 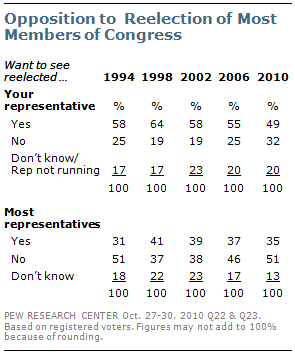 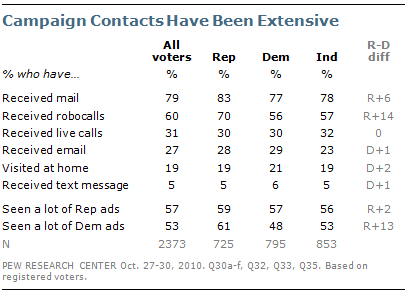 Campaign outreach has intensified over the last few weeks, as more voters report getting mail, and receiving both pre-recorded and live calls than they did two weeks ago. And compared with this point in the 2006 election, more voters are reporting contact over email (27% today, up from 14% then), in person (19%, up from 15%) and over the phone. In 2006, 50% reported receiving phone calls; today, 65% report receiving either an automated (60%) or a live call (31%).

In the last few weeks of the campaign, outreach has intensified for Republicans, Democrats and independents, but Republicans are more likely than other voters to report having received printed mail or pre-recorded telephone calls. While seven-in-ten Republicans (70%) say they have received robocalls about the election, that compares to substantially smaller majorities of both Democrats (56%) and independents (57%). And although 77% of Democrats and 78% of independents say they have received printed mail, 83% of Republicans have done so. There are no significant partisan differences in other forms of direct campaign contact. 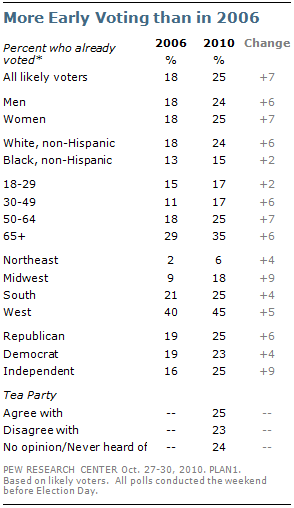 There are no differences in early voting by gender or party. But nearly a quarter (24%) of non-Hispanic whites have already voted, compared with 15% of African Americans.