Q. I am reading the trends reported on the website dedicated to the “Millennial Generation,” of which I am a part (born 1984). There is a lot of interesting information and data regarding a wide range of topics. However, I am curious to know if any deeper research has been performed to back the claim that Millennials are more accepting of racial/ethnic/cultural diversity.

In my opinion, I think Millennials have been trained to provide “politically correct” answers when discussing issues of race and ethnicity that hide their true feelings. While the survey results in “Millennials’ Judgments About Recent Trends Not So Different” states that 67% of interview respondents believed that diversity is a positive thing, that contradicts the vitriolic racism rampant in comment sections on websites, message boards, and other mediums where users feel free to convey more honest opinions while hiding behind the anonymity of a screen-name.

I am wondering if there is a way to question interview respondents in a manner that ensures the participant’s anonymity in order to gain more honest answers?

We take great care in all of our surveys to protect the confidentiality of respondents. Nonetheless, they interact with a human voice over the phone, so the phenomenon you ask about may indeed come into play. In survey research circles, it even has a name: social desirability bias, the tendency of respondents to reply to questions on sensitive topics in a manner they think will be viewed favorably by others. 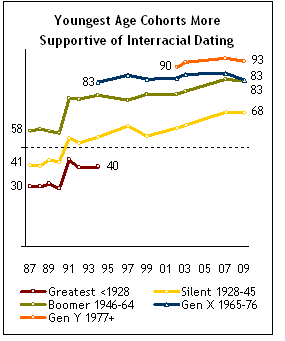 You posit that there may be more of this going on among Millennials than among older respondents. It’s an interesting observation, but we have no way of knowing from our data whether it’s true. On the general topic of racial tolerance and diversity, however, there are a few things we do know. First, all age groups in this country have grown more tolerant over time, and Millennials are the most tolerant of all, as illustrated by the accompanying chart on attitudes about interracial dating. Might there be some social desirability embedded in these responses? Sure. But even if that’s all we’re measuring, it may be its own marker of social progress. Lip service, after all, is one of the tributes we pay to virtue.

We also know that a record 14.6% of all new marriages in the United States in 2008 were between spouses of a difference race or ethnicity from one another — and that the share who intermarry is higher among new spouses in their twenties, thirties and forties than among new spouses who are older. See our recent report on this topic.

None of this proves that there isn’t some social desirability bias in our surveys. But it does illustrate that in some of the most intimate realms of race relations, both attitudes and behaviors are changing. It also suggests that the “vitriolic racism” you’ve encountered in the comment sections of websites is only one aspect of a much more textured — and, on the whole, more positive — story.