As President Obama and his staff weigh their difficult choices in the Afghanistan theater, the public also appears to be finding it difficult to judge the merits of different options for expanding, maintaining or contracting the U.S. effort on that front. A Pew Research Center survey taken in mid-September found a significant drop in the proportion of the public in favor of keeping U.S. troops in Afghanistan until the situation there is stable. Only half (50%) now choose that option, while 43% favor removing troops as soon as possible. As recently as June, 57% favored troop retention.

Other recent polls find the public divided over the question of increasing U.S. troop deployments, as recommended by Gen. Stanley McChrystal, the commanding general in Afghanistan. When asked simply if they favored sending more troops or not, both an Oct. 21 ABC News/Washington Post poll and an Oct. 8 Gallup poll found the public roughly divided. However, the 48% favoring more troops in the Gallup survey represented a seven-point increase over the percentage expressing support just two weeks earlier.

The ABC News poll analysis also noted that support in their survey for additional troop deployments was higher when compared with differently worded questions, perhaps because their question notes that the military leadership had requested an increase. Differences in results associated with small changes in question wording are a measure of the lack of consensus among the public in regard to Afghanistan and the malleability of views in the face of changing developments.

The ABC/Post poll, like other polls, finds a sharp partisan and ideological divide over Afghanistan, with Republicans and conservatives considerably more supportive of the war in general. These partisan differences can be stark — Pew Research’s September poll found 71% of Republicans in favor of keeping troops in Afghanistan compared with 37% of Democrats.

There is increasing public concern that the war is not going well, which undoubtedly underlies public reservations over troop commitments. By late August, amid reports of the Taliban’s resurgence and increasing U.S. troop fatalities, Gallup found that by a 38%-to-61% margin the public judged the war to be going badly; as recently as July that margin had been reversed with 54% saying well and 43% saying badly. A September CBS News/New York Times poll found a similar 35%-53% positive-negative split on the war’s progress. 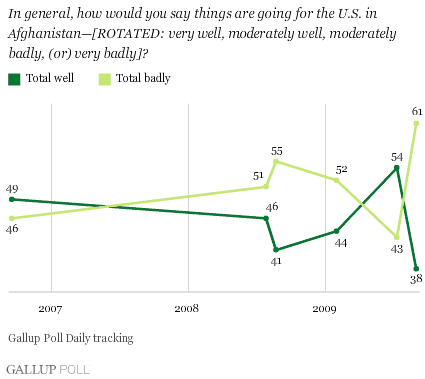 While Americans are divided about troop deployments, they continue to see a rationale for the use of military force in Afghanistan. In late August, Gallup found only 37% of the public ready to call our involvement a mistake, versus 61% who said it was not a mistake. A month earlier, 58% called U.S. involvement in Iraq a mistake. Moreover, most Americans say failure in Afghanistan would result in dire consequences for the United States.

Pew Research’s September poll found fully 76% saying that the Taliban regaining control in Afghanistan would pose a major threat to U.S. interests. And Gallup finds that 80% see the maintenance of U.S. troops in that country as important to weakening terrorists’ ability to attack the U.S., while 69% attach similar importance to keeping the Taliban from regaining control of the country. And an ABC/Post poll shows that large majorities support combating the Taliban’s attempts to reestablish control in Afghanistan, keeping al Qaeda from establishing bases there and, to a lesser extent, establishing a stable democratic government and improving living conditions in the country.

Nonetheless, skepticism has mounted about the Obama administration’s readiness to bring the war to an acceptable conclusion. In early October, Pew Research found a close divide between those saying they were confident that Obama would “do the right thing” in Afghanistan (50%) and those who were not (45%); just 16% expressed a “great deal” of confidence in the commander-in-chief. More recently, an Oct. 21 ABC/Post survey found a 45%-47% approve-disapprove split on Obama’s handling of the war — a startling 15-point drop in approval since August. In addition, fully 63% concluded that the Obama administration lacks a clear plan for handling the Afghan situation.

These poll findings suggest America’s views about the Afghanistan conflict are in a considerable state of flux. Indeed, the public readily concedes that it has not been paying that much attention to the war in recent years. A mid-October Pew Research poll found that public interest in the war in Afghanistan remains fairly modest. Just one-in-four (25%) can correctly estimate the number of U.S. troop deaths in Afghanistan, fewer than can accurately identify the number of fatalities in Iraq (42%). Most people (56%) say that the news about Afghanistan seems like the same thing all the time while nearly as many (53%) admit that they often lack the background information needed to follow news about Afghanistan.