The last surprise in a surprising election campaign seems to be that there may be no surprises come Election Day. As recently as a month ago, this analyst and the American public itself were throwing up our hands and saying we can’t figure this one out — too many intangibles. 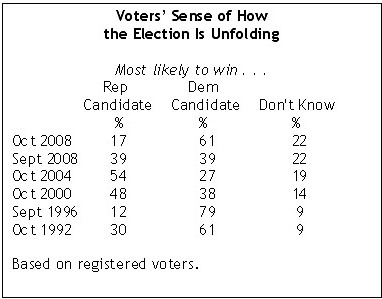 Well things have changed. Barack Obama leads John McCain by a 52%-to-36% margin in Pew’s latest survey, and while uncertainties about the final outcome remain, Americans are no longer deadlocked over who’s going to win the election. Regardless of their own preferences, they pick Obama by a wide margin.

In particular, the debates had a big impact on perceptions of the candidates. Starting with the first presidential debate and then progressing over the course of the two that followed, the public became more comfortable with Obama. An increasing number of voters came to see him as qualified, and they became less comfortable with McCain.

The Arizona senator’s initial advantage as the candidate who would exercise the best judgment in a crisis narrowed markedly following the first debate. By the third debate, a Pew poll found the judgment gap reversed: 41% saw McCain as “having poor judgment,” while 29% said this trait described Obama. Furthermore, a growing number of voters said that the Republican candidate was too old in the aftermath of the third debate.

Views of Sarah Palin may have contributed to questions about McCain’s judgment. As the public got to know more about the Alaska governor, views about her shifted significantly. Even before the vice presidential debate, the voters had changed their minds about whether she was qualified to be president, although they continued to have a positive view of her personally….

Of course, never rule out the unexpected, especially in an election where the unexpected has happened so often. And taking American voters for granted is not a good idea.

Read the full commentary at nytimes.com