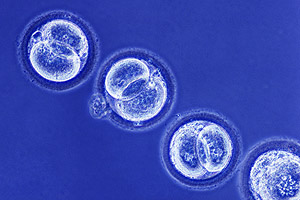 Embryonic stem cell research, which uses special cells found in three- to five-day-old human embryos to seek cures for a host of chronic diseases, has sparked a major moral and political debate in the United States. In the 10 years since University of Wisconsin scientists announced they had harvested potentially life-saving cells from surplus embryos donated by fertility clinics, the ethical dilemma presented by the studies has absorbed activists on both sides of the issue and has risen to the top of state and federal political agendas.

For patients and their families, embryonic stem cell research offers the hope of cures for chronic and debilitating conditions, such as juvenile diabetes, Alzheimer’s disease, Parkinson’s disease, spinal cord injuries and blindness. For scientists, it represents a revolutionary path to discovering the causes and cures for many more human maladies. Embryonic stem cells are pluripotent, that is, they have the unique ability to develop into any of the 220 cell types in the human body. In addition to their versatility, embryonic stem cells are easier to grow in the laboratory than adult stem cells. (See The Science Behind Stem Cell Research.1 )

But many opponents, including some religious leaders, believe that stem cell research raises the same moral issues as abortion. Furthermore, opponents maintain that scientists have other promising ways of reaching the same goals, including non-controversial adult stem cell research. (See The Case Against Embryonic Stem Cell Research: An Interview with Yuval Levin.2 ) But proponents (see The Case For Embryonic Stem Cell Research: An Interview with Jonathan Moreno.3) of the research point out that there is no substitute at this time for research using embryos. In addition, they say, the research has resulted in the destruction of only a few hundred embryos, making it fundamentally different from abortion, which results in the destruction of millions of human embryos every year.

Different religious groups hold a wide variety of opinions on embryonic stem cell research. (See Religious Groups’ Official Positions on Stem Cell Research.4 ) For the Catholic Church and many other Christian groups, life begins at conception, making the research tantamount to homicide because it results in the destruction of human embryos. “Human embryos obtained in vitro are human beings and are subjects with rights; their dignity and right to life must be respected from the first moment of their existence,” the late Pope John Paul II wrote in his 1995 encyclical, The Gospel of Life. Other religious groups do not take a position on the issue, and some, including many Jewish and more-liberal Christian groups, support embryonic stem cell research.

Stem Cell Research at the Crossroads of Religion and Politics

The Science Behind Stem Cell Research

Stem Cell Research Around the World

Quotes on Stem Cell Research from Political, Religious and Other Prominent Figures

Go to the bioethics issue page

National polls indicate that a slim majority of Americans support the research. According to a 2007 national poll by the Pew Forum on Religion & Public Life and the Pew Research Center for the People & the Press, 51 percent say it is more important to conduct stem cell research that could result in new medical cures than to avoid destroying the potential life of human embryos. The same poll found that 35 percent say it is more important not to destroy embryos.5

As the pace of the cutting-edge research quickens and the prospect for cures moves closer to reality, advocates on both sides of the debate see the possibility that, within a few years, scientists will find a way to harvest stem cells without destroying embryos. In late 2007, researchers in Wisconsin and Tokyo announced they had transformed ordinary human skin cells into those that appeared to have the same properties as embryonic stem cells. Religious leaders hailed the discovery as proof that the destruction of embryos is unnecessary. President George W. Bush, in his 2008 State of the Union address, said the groundbreaking new research “has the potential to move us beyond the divisive debates of the past.”

But far from resolving the moral quandary, the highly publicized breakthrough has only intensified the discussion. Scientists around the world quickly cautioned that, although promising, the new research did not guarantee that adult stem cells could successfully be transformed into pluripotent cells. Many, including James Thomson, the researcher who led the team at the University of Wisconsin, publicly argued that embryonic stem cell research should continue.

In Europe, only the United Kingdom, Sweden and Belgium allow all forms of embryonic stem cell studies. On the other end of the spectrum, Austria, Ireland, Poland and Lithuania have outlawed all forms of stem cell research. Germany and Italy have criminalized the extraction of stem cells from human embryos, but scientists are permitted to conduct research on stem cells created elsewhere. Denmark, Finland, France, Greece, Spain and the Netherlands restrict scientists to producing stem cell lines from surplus embryos that fertility clinics plan to destroy. (See Stem Cell Research Around the World.6 )

Political Debate in the U.S.

In the United States, the primary question is whether the federal government should fund embryonic stem cell research. Unlike Japan and most European countries, no federal laws actually limit the research, although six states – Arkansas, Indiana, Louisiana, Michigan, North Dakota and South Dakota – prohibit the creation or destruction of human embryos for medical research.

The issue has split Republican lawmakers. Some oppose any research that involves the destruction of human embryos. Kansas Sen. Sam Brownback and former Pennsylvania Sen. Rick Santorum, for example, are vocal opponents of the research. Others, including Republican presidential candidate Sen. John McCain of Arizona, favor certain aspects of the research. For example, McCain supports federal funding not only for adult stem cell research but also for research using embryos slated for destruction by fertility clinics. Still other high-profile Republicans are vocal supporters. Former first lady Nancy Reagan, who watched her husband, President Ronald Reagan, succumb to the devastating effects of Alzheimer’s disease, has joined other patient advocates in seeking federal funding for embryonic stem cell research. Even staunch abortion opponent Sen. Orrin Hatch of Utah has proposed legislation to support this research.

Still, powerful forces on both sides of the issue have created a deadlock in Washington, D.C., over the funding issue. In 2006 and 2007, for instance, Bush vetoed bipartisan bills that would have unlocked federal funding for the research. Meanwhile, attempts in the U.S. Congress to ban any research involving human embryos have repeatedly failed.

With a stalemate in Washington, much of the debate has shifted to state capitals. At least seven states saw the shortage of federal funding as an opportunity: By investing in the nascent science, they hoped to attract top scientists and incubate what experts predict will be a new multi-billion-dollar biotechnology industry.

In early 2004, New Jersey became the first state to invest in stem cell research. California followed in November of the same year, when voters approved a $3 billion bond measure to fund the research. Over the next two years, Connecticut, Illinois, Maryland, New York and Wisconsin joined the list of states making a commitment to fund stem cell research. Three states – Iowa, Massachusetts and Missouri – made the research legal but did not offer state funding; Massachusetts lawmakers are currently considering an investment in the science.

While these states have taken action to move forward on stem cell research, the issue is unsettled in much of the country. Because the U.S. government allows the research as long as no federal money is spent, state universities and private, nonprofit and corporate laboratories are free to pursue it, except in states that prohibit it.

History of the Debate

Embryonic stem cell research first drew widespread media attention in 2001 when Bush, under pressure from both opponents and supporters, attempted to forge a compromise. That compromise entailed allowing the nation’s medical research underwriters, the National Institutes of Health (NIH), to begin funding these studies using stem cells harvested from surplus embryos before Aug. 9, 2001, the date of his decision.

Religious opponents, who had argued for a federal ban, were disappointed, while scientists complained that most existing stem cell lines (cultured embryonic stem cells grown in a Petri dish) were either contaminated or dying.

Although most Americans became aware of the issue once Bush made his controversial funding decision, the ethical debate over research involving human embryos began much earlier. In the mid-1970s, for example, federal policymakers prohibited funding for so-called test tube babies, laying the groundwork for future discussions of whether the U.S. government should fund research that many people consider immoral.

Around the same time, the U.S. Supreme Court handed down its 1973 Roe v. Wade decision legalizing abortion. That historic decision mobilized abortion opponents, many of whom would later oppose stem cell research because of what they consider to be the destruction of human life.

Some two decades later, President Bill Clinton approved, for the first time, funding of stem cell research involving surplus embryos from fertility clinics. At the same time, he placed a moratorium on support for research involving human cloning, a restriction Bush extended in 2000.

In 1995, Congress overrode Clinton’s decision to fund some types of stem cell research, enacting an appropriations rider, still on the books today, that prevents NIH from funding any research that harms or destroys human embryos. Bush sidestepped this law in 2001 when he allowed funding for stem cell lines that already had been created, also assuring many of his supporters that no new embryos would be destroyed.

Although many abortion opponents oppose both techniques, some supporters say harvesting potentially life-saving cells from embryos that otherwise would be destroyed is justified. But some supporters of the research also argue against the creation of embryos for the sole purpose of harvesting cells and then destroying them.

Bioethics experts say the stem cell debate marks the first time in U.S. history that medical science has played such a prominent role in electoral politics. Indeed, the issue had a significant impact on the 2006 U.S. Senate election in Missouri, where voters debated and ultimately approved a proposed state constitutional amendment ensuring the legality of embryonic stem cell research. Missouri Democrat Claire McCaskill, who supports the research, ousted Republican incumbent and stem cell research opponent Jim Talent in part because of their differences over this issue. McCaskill backed the first-in-the-nation amendment; Talent opposed it.

If the next president decides to drop Bush’s restrictions on stem cell funding, Congress could press again for federal money. But with an economic downturn and a growing budget deficit, competition for NIH funding is expected to be stiff. Even without federal money, however, state and private investment in stem cell studies is expected to continue.

1 The Science Behind Stem Cell Research

2 The Case Against Embryonic Stem Cell Research: An Interview with Yuval Levin

3 The Case For Embryonic Stem Cell Research: An Interview with Jonathan Moreno

6 Stem Cell Research Around the World

Political Debate in the U.S.History of the DebateNotesSpecial Report: Embryonic Stem Cell Research