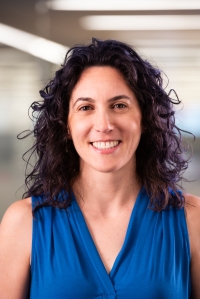 Becka A. Alper is a senior researcher at Pew Research Center. She contributes to the Center’s domestic religion polls and is an expert on the views and demographic profile of U.S. Jews. Alper is an author of Pew Research Center reports such as “Jewish Americans in 2020,” “A Portrait of American Orthodox Jews,” “The Religious Typology,” “What Americans Know about Religion,” and “What Americans Know about the Holocaust.” Before joining the Center, she was a postdoctoral research associate working on the Youth Activism Project at the University of Arizona. Alper received doctorate and master’s degrees in sociology from Purdue University.

Publications
Displaying 1 - 10 of 15 results
Religious Americans less likely to believe intelligent life exists on other planets
In the U.S., highly religious adults are much more skeptical about the possibility of extraterrestrial life than those who are less religious.
10 key findings about Jewish Americans
A new Pew Research Center report takes a closer look at Jewish Americans. Here are 10 of our key findings.
When Americans think about a specific religion, here are some of the first people who come to mind
More than half of U.S. adults name the pope (47%) or a specific pope (7%) when asked who comes to mind when they think of Catholicism.
6 facts about what Americans know about religion
Americans with higher education and income are more likely to be involved in community groups
Nearly six-in-ten Americans participate in some type of community group or organization, including 11% who say they take part in at least four such groups.
From the Solidly Secular to Sunday Stalwarts, a look at our new religious typology
Most American adults identify with a religion, describing themselves as Protestants, Catholics or Jews, to name just a few examples. But a new Pew Research Center analysis looks at beliefs and behaviors that cut across many religious identities, producing a new and revealing classification, or typology, of religion in America that sorts U.S. adults into seven cohesive groups.
Why America’s ‘nones’ don’t identify with a religion
Six-in-ten religious "nones" in the U.S. say the questioning of religious teachings is a very important reason for their lack of affiliation. The second-most-common reason is opposition to the positions taken by churches on social and political issues.
Though still conservative, young evangelicals are more liberal than their elders on some issues
The generation gap between millennials and older adults on social and political issues exists even among evangelical Protestants.
If the U.S. had 100 people: Charting Americans’ religious beliefs and practices
See a profile of American religious beliefs and practices if the country were made up of exactly 100 adults.
If the U.S. had 100 people: Charting Americans' religious affiliations
Imagining the U.S. as a town of 100 people can help illuminate the nation's religious diversity.
← Prev Page
You are reading page1Page2
Next Page →