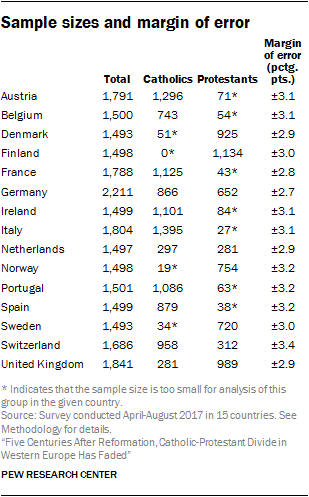 Pew Research Center conducted surveys among 24,599 adults across 15 countries in Western Europe. Interviewing was carried out under the direction of GfK through telephones (both cellphones and landlines) from April to August 2017. The questionnaire administered by survey interviewers was designed by Pew Research Center staff in consultation with subject matter experts and advisers to the project. The wording of several questions was tested cognitively, and the full survey questionnaire was pretested in all countries prior to fieldwork.

The surveys are nationally representative, with samples of about 1,500 or more respondents in each country, allowing researchers to analyze the opinions of Catholics in 11 countries and of Protestants in eight countries. The weighted datasets in each country match national benchmarks on the population’s age distribution, gender, education and region of residence.

More details about our international survey methodology, including country-specific sample designs for this study, are available here.

500 years after the Reformation, 5 facts about Protestants around the world

U.S. Protestants Are Not Defined by Reformation-Era Controversies 500 Years Later

After 500 Years, Reformation-Era Divisions Have Lost Much of Their Potency