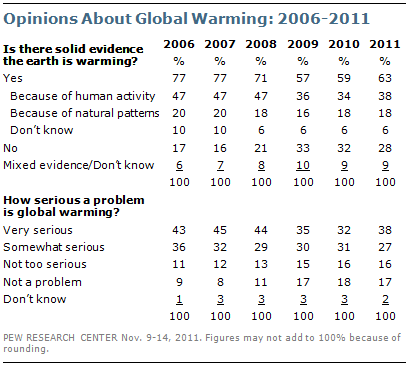 Nonetheless, substantially fewer Americans say there is solid evidence of global warming than did so from 2006 to 2008. And in those years, higher percentages viewed global warming as a very serious problem than do so today.

The national survey by the Pew Research Center for the People & the Press, conducted Nov. 9-14 among 2,001 adults, finds that nearly four-in-ten (38%) say that global warming is occurring mostly because of human activity, such as the burning of fossil fuels, which also is slightly higher than last year (34%). From 2006-2008, 47% said global warming was mostly caused by human activity. 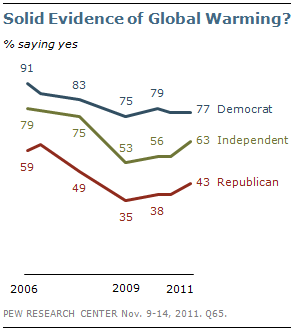 The survey finds a continuing partisan divide in opinions about global warming: 77% of Democrats and 63% of independents say there is solid evidence that the average temperature on earth has been getting warmer over the past few decades. Just 43% of Republicans agree.

There also is a large partisan gap in views about the causes of global warming: 51% of Democrats and 40% of independents say the earth is getting warmer mostly because of human activity. Just 19% of Republicans say rising temperatures are mostly attributable to human activity. 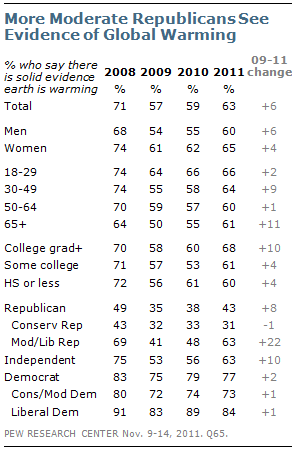 Since 2009, there have been sharp increases in the percentages of independents and moderate and liberal Republicans who say there is solid evidence of global warming.

Currently, 63% of independents say there is solid evidence of rising temperatures, up from 53% in October 2009. The shift has been more dramatic among moderate and liberal Republicans, who comprise about a third of all Republicans. More than six-in-ten (63%) now see solid evidence of global warming, compared with 41% two years ago.

Most See Warming as Serious Problem 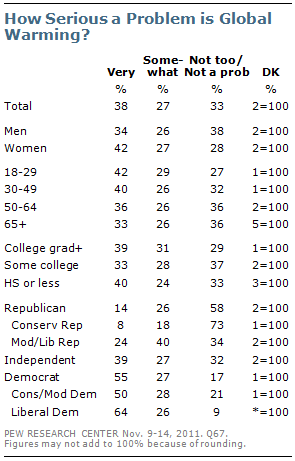 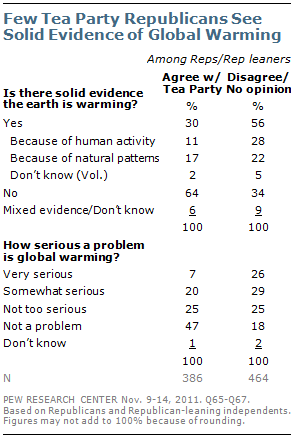 And while more than half (55%) of Republicans and leaners who do not agree with the Tea Party view global warming as at least a somewhat serious problem, just 27% of Tea Party Republicans agree.