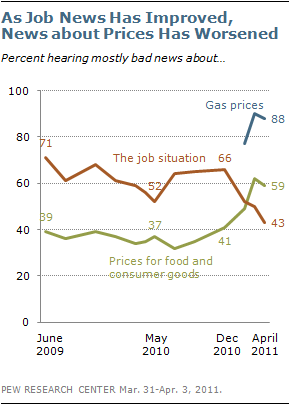 Media coverage of the unrest in Libya continues to surpass public interest in this story. News about the fighting in Libya – and the airstrikes conducted by U.S. and NATO forces – accounted for 34% of the newshole, much more than any other story, according to a separate analysis by the Pew Research Center’s Project for Excellence in Journalism. Just 13% of the public says this was the news they followed most closely.

The aftermath of the March 11 disaster in Japan accounted for 12% of coverage, down from 15% one week earlier and 57% the week before that. And news about the economy – including last week’s upbeat news about employment and more negative numbers on housing prices – made up 10% of coverage. 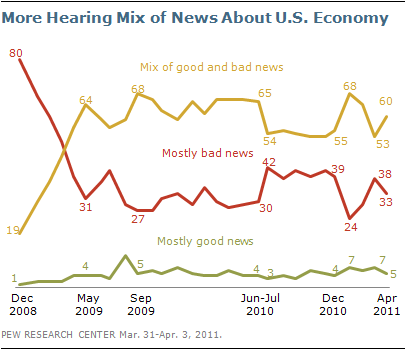 Perceptions of economic news have fluctuated since mid-2009 – along with the ups and downs of an economy struggling to recover. During the first half of 2010, about two-thirds of the public said they were hearing a mix of good and bad economic news, but then perceptions grew more negative as the recovery stalled.

At the start of 2011, the public detected a more upbeat tone to economic news, but that perception soon worsened as concerns grew about gas prices and inflation.

Differing Views of News about Jobs and Prices

By contrast, 59% say they are hearing mostly bad news about food and consumer prices. That is little changed from last month (62%), but is up 18 points since December 2010. Moreover, opinions of the news about gas prices are overwhelmingly negative (88% mostly bad). 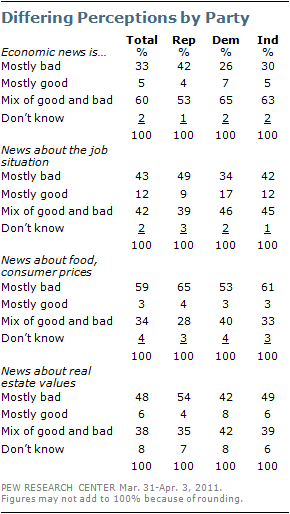 Nearly two-thirds of Republicans (65%) say they are hearing mostly bad news about food and consumer prices, compared with 53% of Democrats. About six-in-ten independents (61%) say the same.

More than half of Republicans (54%) say they are hearing mostly bad news about real estate values, compared with 42% of Democrats. 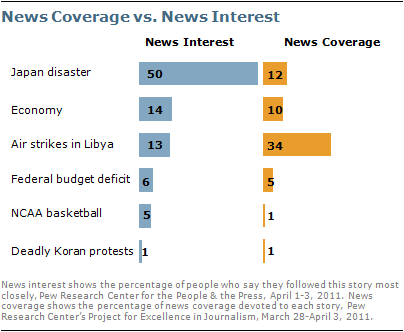 For the second week in a row, the public kept its focus on the aftermath of the disaster in Japan, while the fighting in Libya received the most media coverage.

Men are more likely than women to say they have been following the U.S. and allied air strikes in Libya very closely (43% vs. 31%). There is no significant difference among partisans on this story.

Just 15% say they very closely followed news that broke late in the week about deadly protests in Afghanistan that followed a Florida pastor’s burning of a Koran; 1% say this was the news they followed most closely. This story accounted for 1% of coverage.

And 13% say they followed the NCAA basketball tournament very closely, down slightly from the 18% that said this in 2010; 5% say this was the news they followed most closely. News about the tournament accounted for 1% of the coverage measured by PEJ. 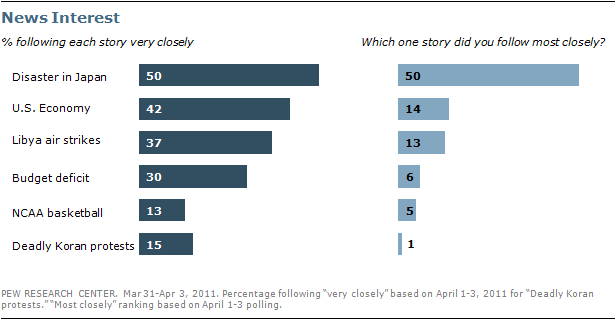 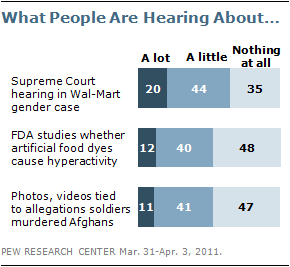 Nearly half of the public says they heard nothing at all last week about the Food and Drug Administration looking into whether artificial food dyes can cause hyperactivity in children or the publication of grisly photos tied to allegations that U.S. soldiers murdered civilians in Afghanistan.

More had heard about a Supreme Court hearing last week about a major gender discrimination case involving Wal-Mart. Two-in-ten (20%) say they heard a lot about this story, while 44% say they heard a little. About a third (35%) say they heard nothing at all about this. The hearing dealt with whether women who have worked at Wal-Mart may sue the retailer in a class action law suit.

These findings are based on the most recent installment of the weekly News Interest Index, an ongoing project of the Pew Research Center for the People & the Press. The index, building on the Center’s longstanding research into public attentiveness to major news stories, examines news interest as it relates to the news media’s coverage. The weekly survey is conducted in conjunction with The Project for Excellence in Journalism’s News Coverage Index, which monitors the news reported by major newspaper, television, radio and online news outlets on an ongoing basis. In the most recent week, data relating to news coverage were collected March 28 to April 3, and survey data measuring public interest in the top news stories of the week were collected March 31 to April 3, from a nationally representative sample of 1,008 adults.