Television’s solitary screen is being supplemented by multi-screen interactivity. Half of all adult cell owners (52%) have used their phones recently for engagement, diversion, or interaction with other people while watching TV. The Pew Research Center’s Internet & American Life Project measured the prevalence of these multi-screen viewing experiences by asking the 88% of American adults who are cell owners whether they had used their phone to engage in several different activities while watching television in the 30 days preceding an April 2012 survey. We learned that:

Three more questions were asked of the 57% of cell owners who download apps, use the internet, or use email on their phones:

Taken together, that works out to 52% of all adult cell owners who are “connected viewers”—meaning they took part in at least one of these activities in the 30 days preceding our survey.2 Young adults in particular stand out for their embrace of multi-screen viewing experiences, as some 81% of mobile owners ages 18-24 reported using their cell phones during televised programming in the preceding 30 days. Other demographic differences in “connected viewing” include: 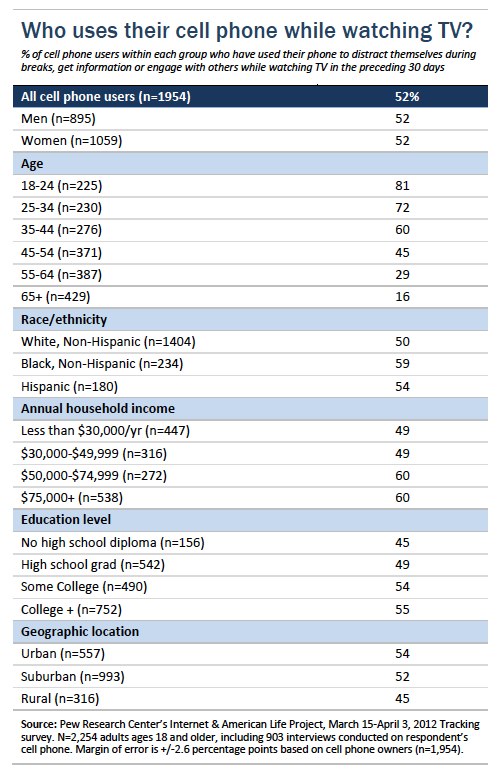 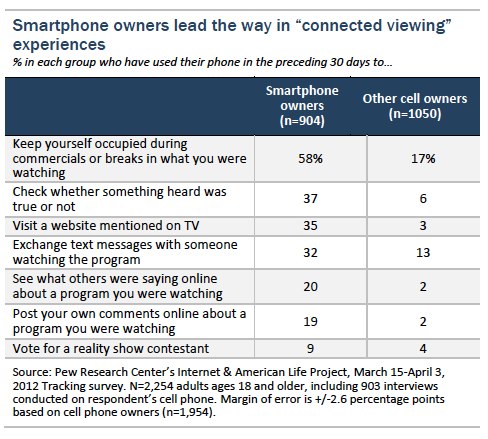 The use of cell phones as a “distraction device” or multitasking tool during programming breaks is the most prevalent of the seven individual connected viewing behaviors that we measured in our survey. Some 38% of adult cell owners reported using their mobile device to keep themselves occupied during commercials or other breaks in a program they were watching within the last 30 days.3

Young adults are especially likely to use their mobile phones to keep themselves occupied while watching television, as nearly three quarters of all cell owners ages 18-24 (73%) used their cell phone in this manner recently. But while this behavior is especially common among the youngest cell owners, a majority of 25-34 year olds and just under half of those in their mid-30s to mid-40s have done this recently. 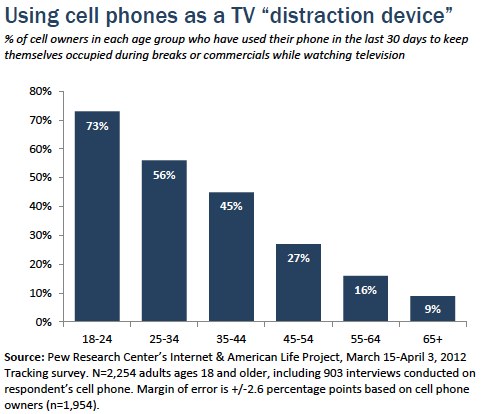 Outside of these age differences, most cell owners are equally likely to use their phones for “distracted viewing” regardless of demographic characteristics. Educational background is a modest exception to this rule, as mobile users with at least some college experience are somewhat more likely to use their phone as a distraction device compared with those who have not attended college (42% vs. 34%).

Usage of cell phones to get more information about televised content

Cell phones allow viewers to engage more deeply with televised content by letting viewers seek out additional information or commentary about programming that interests them. This includes activities such as using one’s mobile device to visit a website mentioned on television (20% of cell owners have done this recently), checking whether televised statements are true or not (22%), or going online to read the opinions of others watching the same program (11%).

Overall, 32% of cell owners used their mobile devices in the 30 days preceding our survey for one or more of these reasons, and cell owners under the age of 25 have high levels of engagement in each of these activities. At the same time, using one’s cell phone to visit a website mentioned during televised programming is relatively common with older cell owners as well—engagement in this behavior does not drop significantly until approximately age 45. 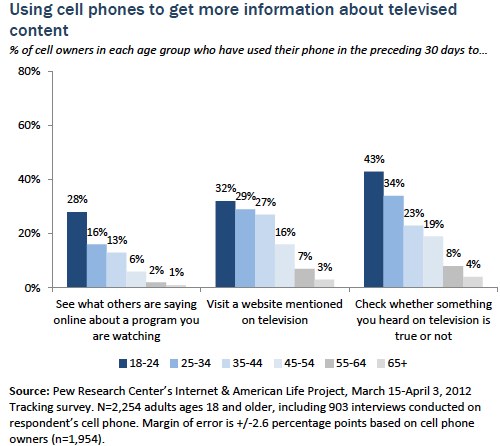 Non-white cell phone owners also stand out when it comes to using their phones to engage more deeply with information they have seen on television. African-American cell owners are especially likely to say that they have used their phone recently to see what others are saying online about a program they are watching (28% of African-American cell owners have done this recently, compared with 8% of whites and 12% of Latinos). And both black and Latino cell owners are more likely than whites to have recently used their phone to fact-check something they heard on-air. Some 33% of African American cell owners and 30% of Latinos have done this in the preceding 30 days, compared to 19% of whites.

As we saw with the other connected viewing experiences discussed above, younger cell owners are more likely than their elders to engage with others around televised content. This is especially true for posting one’s comments online and for sharing text messages with others watching the same program—for each of these activities, the youngest cell owners (those ages 18-24) stand out even compared with those just a few years older. 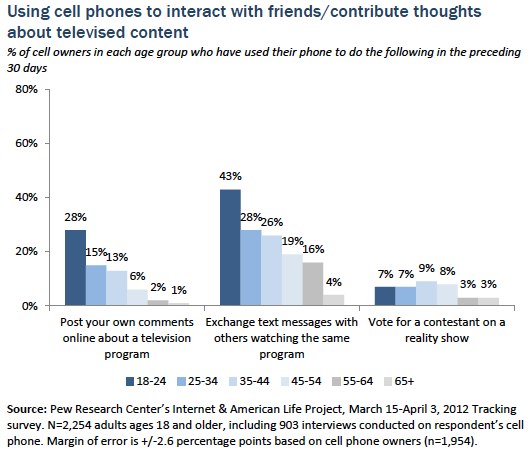 While women and men are equally likely to be connected viewers overall, female cell owners are slightly more likely than men to engage in individual activities such as sharing text messages with others during televised programming (25% vs. 21%), posting their own comments online about a show they are watching (13% vs. 9%) and voting for a contestant on a reality show (8% vs. 4%).