Some 95% of teens 12-17 use the internet, according to a survey of 799 teens conducted by the Pew Research Center’s Internet & American Life Project between April 19 and July 14, 2011. In that study, the teens were asked about a number of online behaviors and the results for video-oriented activities are reported here.

37% of online teens have video chat conversations with others.

Nearly 2 in 5 online teens (37%) say they have video chatted with someone else using applications such as Skype, iChat or Googletalk.

Girls are more likely than boys to video chat.

Online girls are more likely to report video chatting than boys, with 42% of girls who use the internet saying they have video chatted compared with about a third (33%) of boys.

Teenagers of different ages are equally likely to video chat.

White teens who use the internet are more likely to report video chatting than online Latino teens; 41% of white teens do so, as do 28% of Latino youth. There are no statistically significant differences between online black youth and either white or Latino youth in video chatting.

Online teens from families with the lowest levels of parental education – where a parent has not received a high school diploma – are much less likely than others to video chat with just 14% of teens in those families video chatting, compared with 40% of teens with parents with higher levels of education.

Frequent internet users, texters and social media users are all more likely to video chat than others.

Some 43% of daily internet users video chat, compared with 31% of weekly users and 1% of those who use the internet less often.

Our survey found that 77% of all teens ages 12-17 have cell phones and 97% of cell users (or 75% of all teens) can send and receive texts. Teens who text are also more likely to use video chatting, with 40% of texting teens chatting compared with 27% of non-texters. Other social media communicators also show similar patterns.

Some 77% of all teens–or 80% of the internet-using teens–say they use social networking sites such as Facebook; 16% of online teens use Twitter. Teens who use Facebook and Twitter are more likely to use video chat, with 41% of Facebook users chatting (compared with 25% of non-users) and 60% of Twitter users using video chat (compared with 33% of non-Twitter users.) 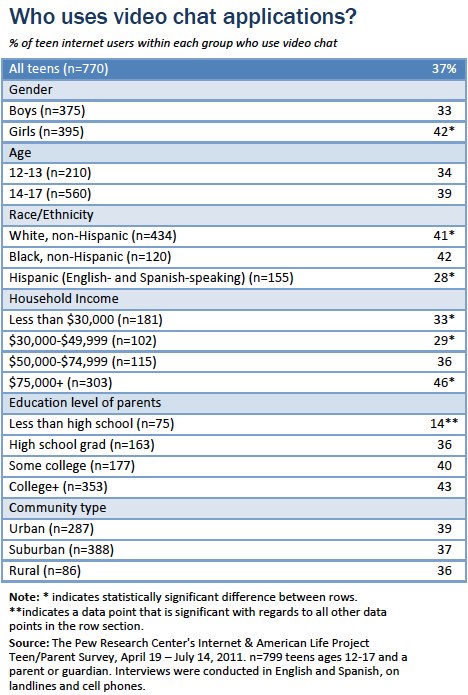 In our most recent data collection, older teens 14-17 are more likely to record and upload video than their younger counter parts, with 30% of online older teens saying they record and share videos, compared with 21% of 12-13 year olds.

In a change since 2006, boys and girls are equally likely to record and upload videos.

Nearly equal shares of online boys (28%) and girls (26%) say they shoot and share video. In 2006, online boys were nearly twice as likely as online girls to report uploading video they had taken, with 19% of boys and 10% of girls reporting the activity.

Those teens who use social network sites more frequently are also more likely to take and share video – 37% of daily social media users take and post videos, as do 24% of weekly social network users, and 17% of those who visit social sites less often than weekly.

There are no differences in recording and uploading video by race, ethnicity or socio-economic status. 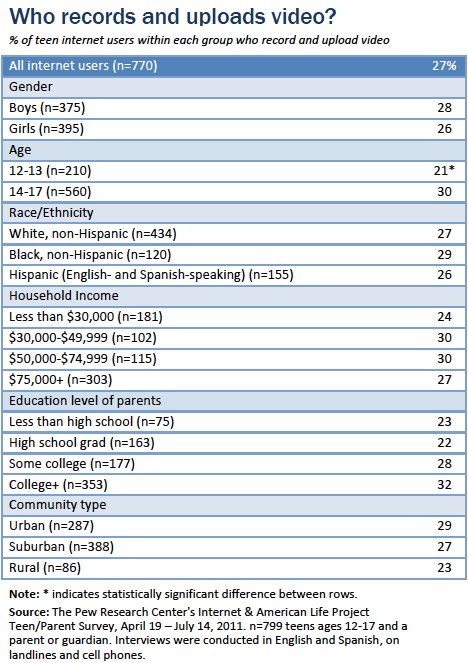 Fewer teens stream live video to the internet for others to watch than engage in simple uploading – just 13% of teen internet users say they stream video live online.  There are few demographic differences in video streaming.  Boys and girls (13% of boys and 12% of girls) are equally likely to do it, as are younger and older teens.  Frequent internet users – those who go online daily – are more likely to stream video than those who go online weekly (16% of daily users, compared with 7% of weekly users). Teens with home broadband connectivity are also more likely to stream video live for others to view.  While 14% of broadband users stream, just 3% of those with dial-up connectivity do so.

Social media users are more likely to stream video than others.

Other choices that teens make about their online privacy do not relate to their likelihood of streaming video. 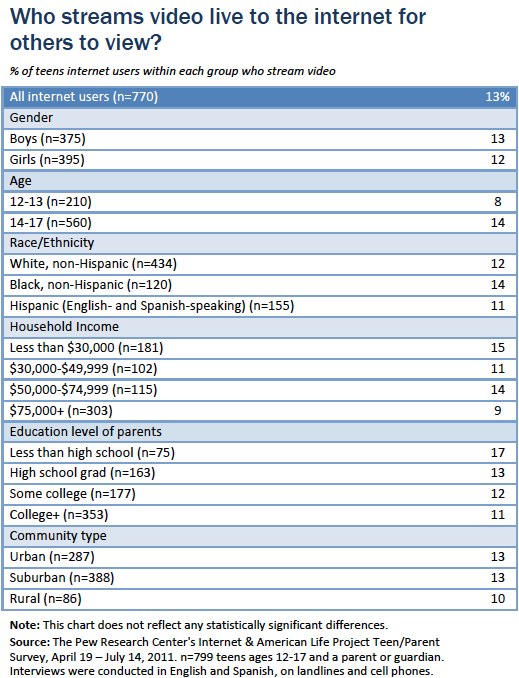