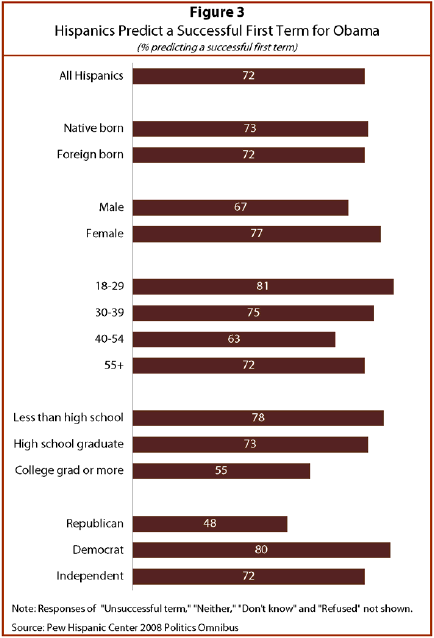 Latinos are optimistic about the incoming Obama administration. Seventy-two percent believe that Barack Obama will have a successful first term, while 13% expect his first term to be unsuccessful.

Both native-born and foreign-born Latinos hold equally positive perspectives on the Obama administration. Seventy-three percent of the native born foresee success for Obama, as do 72% of the foreign born.

Men are less optimistic than women about the future success of the Obama administration–67% versus 77%.

Priorities for the Obama Administration 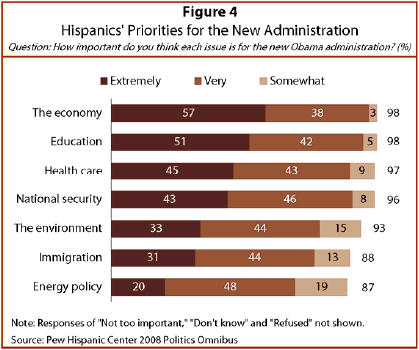 Latinos rate the economy as a top priority for the new administration.3 Ninety-eight percent identify the economy as extremely (57%), very (38%) or somewhat important (3%). Education is also a top priority; 98% of Latinos see it as an important issue, and 51% identify it as extremely important. Health care ranks next, with 97% of Latinos stating that it is an important issue. National security (96%) and the environment (93%) are also high priorities on the list of political issues. Energy policy ranks relatively low among Hispanics compared with other issues, though a sizable proportion—87%—consider it important.

Next: III. Looking Back: The Bush Administration
← Prev Page
Page1You are reading page2Page3Page4Page5
Next Page →