Hispanics are an important voting group in the forthcoming election, and their widespread pessimism about the situation of Latinos as well as their strong opposition to federal enforcement policies could well have consequences in the political arena. This section of the report includes the opinions of all Hispanics, both native born and foreign born, and compares them to the opinions of Hispanic registered voters on how well the political parties and presidential candidates are doing with Hispanics and on the issue of immigration.

Political Parties and Concerns for Hispanics

Today 65% of Latino registered voters identify with or lean toward the Democratic Party, and 26% identify with or lean toward the Republican Party. This 39 percentage point gap in identification between the two parties is the largest observed in the past decade and reflects a growing level of identification among Latino registered voters with the Democratic Party (Lopez and Minushkin 2008). 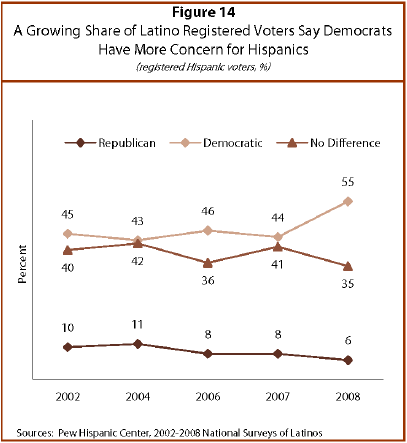 The trend towards increased Hispanic identification with the Democratic Party is echoed in another finding from this survey. About half (49%) of all Latinos say that the Democratic Party, rather than the Republican Party, has more concern for Hispanics. This figure has increased by 14 percentage points since 2004. Most of the gains for the Democrats have come from a reduction in the share who say there is no difference between the parties. Just 7% of Latinos say that the Republican Party has more concern for Hispanics, 2 percentage points lower than in 2004.

The Issue of Immigration 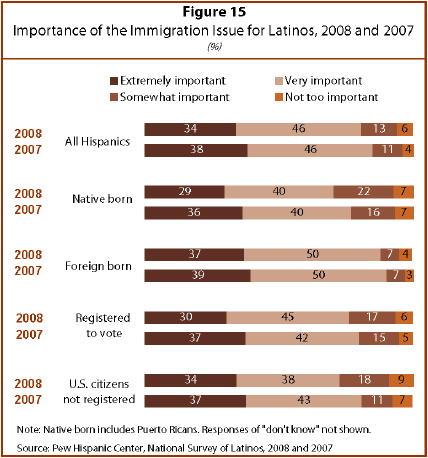 Today, more Latinos than during the last presidential campaign say that the issue of immigration is extremely important to them personally—34% versus 28% in 2004 (Pew Hispanic Center/Kaiser Family Foundation 2004). However, slightly fewer say this today than in 2007 (38%), a year when Congress was considering an immigration bill and the media were giving extensive coverage to the issue of immigration (Taylor and Fry 2007).

Assessing the Candidates on Immigration 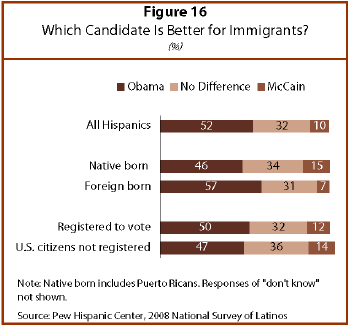 Next: Appendix A: Survey Methodology
← Prev Page
Page1Page2Page3Page4You are reading page5Page6
Next Page →