Most Latinos see religion as a moral compass to guide their own political thinking, and they expect the same of their political leaders. Most view the pulpit as an appropriate place for the expression of political views. These attitudes are widely shared among Hispanics of all the major religious traditions.

Two-thirds of Hispanics say that their religious beliefs are an important influence on their political thinking. More than half say churches and other houses of worship should address the social and political questions of the day. By nearly a two-to-one margin, Latinos say that there has been too little expression of religious faith by political leaders rather than too much. Churchgoing Hispanics report that their clergy often address political matters, although the extent of that practice varies considerably by issue and by religious tradition.

The extent to which Hispanics believe religion should play an important role in politics varies, often quite starkly, depending on religious tradition. In each of the measures utilized by this study, a role for religion in public life is endorsed by larger shares of evangelicals than by members of other religious traditions.

Compared with evangelicals, for example, Catholics and mainline Protestants are much less likely to say that their religious beliefs are a very important influence on their political thinking, although the difference in views is narrower on other measures. Secular Latinos are predictably far less inclined to grant religion a role in politics. Significantly, however, more than one-in-three seculars acknowledge that religion plays some role in shaping their political thinking.

Nativity also matters. Generally speaking, foreign-born Latinos are more likely to say that their religious views are very important in influencing their political thinking and that political leaders should be more vocal about their faith.

This chapter examines the link between religion and politics by focusing on questions that were designed to probe attitudes in this area. The results for each question are analyzed by religious tradition, by nativity and, where relevant, by frequency of church attendance.

A separate discussion at the end of this chapter focuses on attitudes and perceptions on immigration and discrimination. Both are central to the lives of many Hispanics and, over the past year, have been topics of considerable political debate across the country.

The importance of religious beliefs on political thinking

A significant minority (30%) of Hispanics, however, say their religious beliefs are either not too important or not at all important to their political thinking. Almost one-in-three (32%) mainline Protestants hold that view, as do 30% of Catholics.

There is a significant difference among Catholics by nativity on this question. About four-in-ten (41%) foreign-born Catholics say their beliefs are very important in framing their politics, compared with 26% among the native born. The same pattern is evident among mainline Protestants, though to a lesser extent than among Catholics. Notably, there is no difference by nativity among evangelicals, with similar majorities of both the foreign and native born agreeing that their religious beliefs are very important (62% and 64%, respectively). 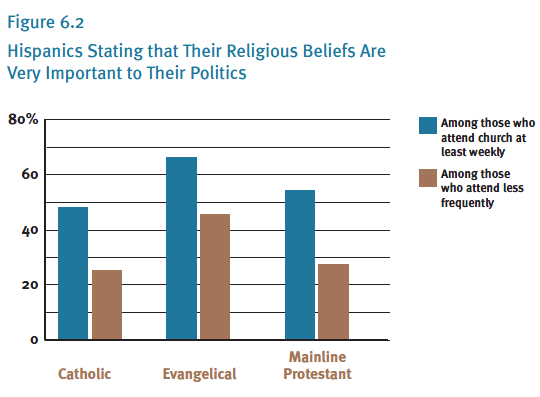 Expressions of faith by politicians and clergy

Responses to two questions offer an indication of the importance Latinos generally place on the role of religion in public life. In the first, a plurality of Hispanics (45%) say political leaders do not express their religious faith often enough. In the second, a majority of Latinos (56%) say that religious institutions should express their opinions on the political and social issues of the day. In both cases, these sentiments are somewhat stronger among evangelicals than among Catholics or mainline Protestants, and they are more prevalent among those who attend church at least weekly than among those who attend less frequently

The Pew 2006 U.S. Religion Survey found that 47% of non-Hispanics say that religious institutions should keep out of political matters while 50% say churches and houses of worship should express their views.

There are pronounced contrasts between Hispanic and non-Hispanic Catholics. A majority of white Catholics (54%) say that churches should keep out of politics, compared with 36% of Latino Catholics. Latino evangelicals, on the other hand, are generally in agreement with their white counterparts on this question, with sizable majorities among both saying the church should have a say on social and political issues (65% for Latinos and 62% among white evangelicals). Overall, Hispanic views on this question more closely resemble those of blacks, who also strongly favor (67%) churches expressing views on political issues. 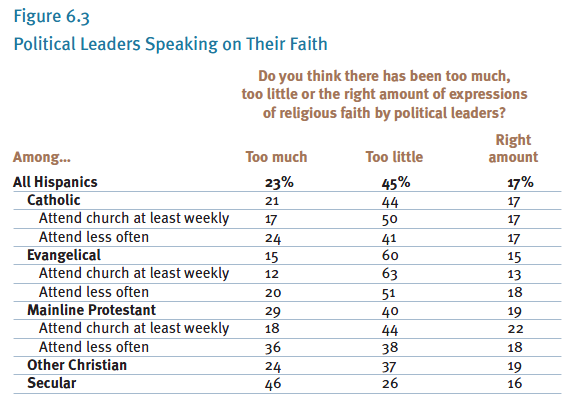 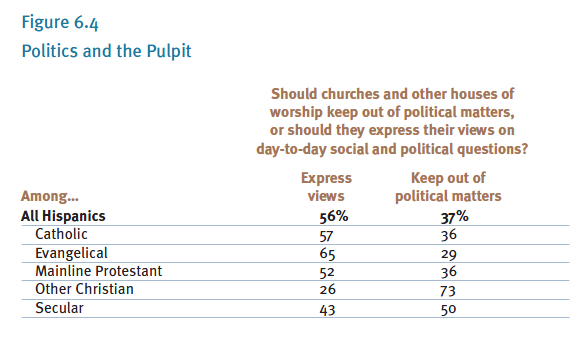 What Latinos hear from the pulpit

To explore what kinds of political and social issues religious leaders are addressing at churches and houses of worship attended by Latinos, the study asked a series of questions of respondents who reported attending religious services at least occasionally. Each question asked whether the clergy at their house of worship ever speak out on a specific matter of public policy or political involvement. The results varied depending on religious tradition and the specific issue in question.

A majority (58%) of Latinos who attend religious services say that abortion is addressed by the clergy at their churches, and the shares are similar among evangelicals (64%) and Catholics (59%).

Overall, Latino churchgoers who say their clergy speak out on laws regarding homosexuality (41%) are surpassed by those who say the topic is not addressed from the pulpit (52%). There are sharp differences between religious traditions, however. About 58% of evangelicals say the issue is addressed from the pulpit, a much higher figure than among Catholics (37%) or among mainline Protestants (42%).

As noted above, a majority of Latinos say that churches and other houses of worship should express their views on day-to-day social and political issues. When it comes to candidates and elections, however, the survey shows that most churchgoing Latinos do not hear these subjects addressed by their clergy. By a greater than two-to-one margin (64% vs. 28%), churchgoing Latinos say that their clergy do not speak out on candidates and elections.

Catholics, evangelicals and mainline Protestants, who often differ when it comes to other measures of religion and politics, show remarkable consistency on this question. In each of these religious traditions about seven-in-ten Latinos say their clergy do not speak out about candidates and elections.

Foreign-born Latino Catholics are twice as likely to say their clergy addressed candidates and elections, compared with native-born Catholics (35% vs. 16%). Indeed, Catholics stand out in this regard. In no other religious tradition is nativity such a significant factor. Among evangelicals, for example, there is very little difference on this question between the native and foreign born.

More than half of churchgoing Hispanics do say, however, that their clergy speak on the importance of voting, and the results are similar across the major religious traditions.

Immigration reform drew considerable attention in 2006 because of the sharp debate in Washington as well as the nationwide protests that resulted. About equal shares of Latino churchgoers say that their clergy speak out about laws on immigration (44%) as say that the issue is not addressed (48%).

Foreign-born Latinos, however, are considerably more likely to say their clergy speak out on immigration (52%) than are the native born (31%). The differences according to nativity are more substantial on this issue than on any of the others in the series of questions exploring what political subjects are addressed by clergy. 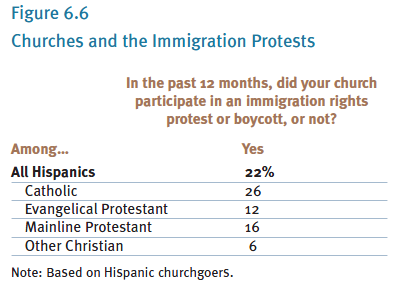 Media accounts of the immigration marches in the spring of 2006 often emphasized the involvement of religious organizations. In this study, Hispanics who attend religious services were asked whether they or their churches had participated in an immigration rights protest or boycott in the past year.

About 22% of Latinos who attend religious services say their place of worship participated in an immigration protest in the year prior to the survey. There are, however, some differences depending on religious tradition.

One-in-four Catholics (26%) say their church participated in a protest or boycott, more than twice the rate among evangelicals (12%) and higher also than among mainline Protestants (16%). Compared with their native-born counterparts, foreign-born Catholics and evangelicals are more likely to attend churches that took a more active role on immigration. 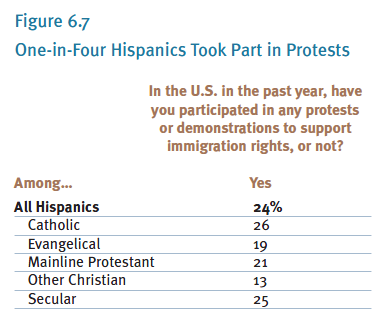 Views on Immigration and Discrimination

Fully two-thirds (66%) of Latinos in the survey say that immigrants strengthen society, while a small but significant minority (23%) takes the opposite view. Catholic and mainline Protestants are in agreement on this question, with more than two-thirds of each saying immigrants strengthen society (67% and 69%, respectively). A somewhat lower proportion of evangelicals (59%) agree with this statement. Conversely, among evangelicals, one-in-three (33%) say immigrants threaten society, the highest number among all the religious traditions.

For the most part, foreign-born Hispanics are more positive on this question than are the native born. The majority of both the foreign born and the native born see immigrants as strengthening the U.S., but there are significant differences on this issue among Catholics and evangelicals. 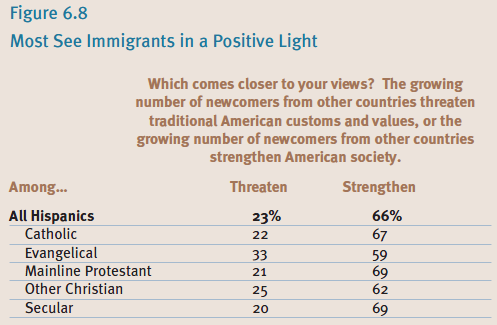 Nearly the same split is evident among evangelicals. In that case, 64% of the foreign born hold a positive view, compared with 54% among the native born. More than four-in-ten (41%) of nativeborn evangelicals view increased migration as a threat, considerably more than among their foreign-born counterparts (26%).

Perceptions of discrimination among Latinos vary depending on nativity. Among Catholics, for example, nearly three-quarters (73%) of the foreign born see discrimination as a major problem, compared with 50% among the native born. The difference is as pronounced among evangelicals (66% vs. 40%) and mainline Protestants (68% vs. 49%). 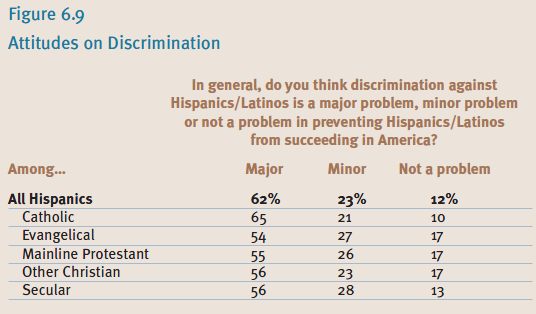