The number of foreign-born residents who became U.S. citizens rose from an annual average of less than 150,000 throughout the 1970s to more than 650,000 since the mid-1990s. This growth reflects both an increase in the nation’s supply of legal immigrants and an increased likelihood that those who are eligible apply for citizenship.

After years of incremental, steady increases, the pace of naturalizations suddenly picked up in the early 1990s. The number of people who became citizens had risen by about 5% annually from 1970 through 1993 (Figure 4 and Appendix Table 1). But a new pattern emerged as many more immigrants began to file naturalization papers. The number of new citizens doubled—from 240,000 to 490,000—between 1992 and 1995. In 1996, for the first time, more than 1 million people took the oath of citizenship. 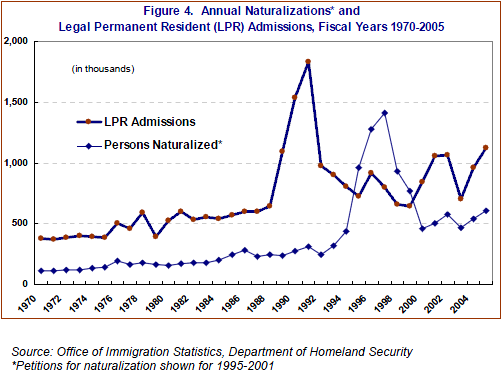 The number dropped after that, in part because of delays in processing applications, but began rising again. So far this decade, an average of about 630,000 people has become naturalized citizens each year.

The number of foreign-born residents who become naturalized citizens in any given year generally tracks the number admitted six years earlier. [See box explaining citizenship eligibility.] The total can be affected by backlogs in the application system or changes in the processing of applications. It also depends on the share of legally admitted immigrants choosing to apply for citizenship.

The number of people admitted as legal permanent residents, which has bumped up and down since the early 1990s, exceeded 1 million in at least three years this decade. That suggests that the number of naturalizations, now about 600,000 to 700,000 a year, may increase slightly in the near future and reach a new plateau.

The data indicate that eligible immigrants increasingly are likely to apply for citizenship and naturalize. The number of legal permanent residents has gone up since 1970, as has the share becoming naturalized citizens.