As in 2002 and 2004, a significant majority of Latinos (82%) say that discrimination is a problem that prevents Latinos in general from succeeding in America. The intensity of that attitude, however, has increased: 58% of Hispanics now say discrimination is a “major” problem, compared with 44% in the 2002 National Survey of Latinos. Both the native and foreign born see greater problems with discrimination. 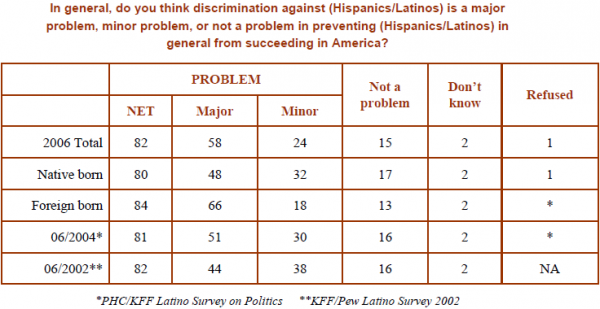 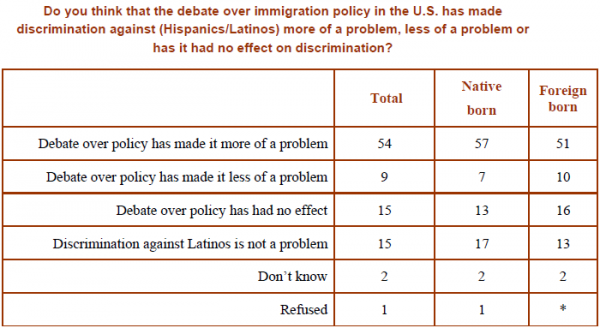 The perception that the debate has had a negative impact on discrimination is equally shared by a majority of Latinos, regardless of gender, age, education, income, religious preference or party affiliation. It held regardless of whether Hispanics lacked a high school diploma or had a college degree or higher; whether they earned $30,000 or less or $50,000 or more.

Given that much of the heated rhetoric was aimed at immigrants, particularly at those who are in the country without authorization, foreign-born Latinos might have been expected to register a stronger reaction than those who are native born. However, 51% of the foreign born see the debates as the cause of more discrimination, compared with 57% of the native born, and the difference between them is not statistically significant.

Examining responses by generation of nativity confirms that Latinos far removed from the immigrant experience in their family histories perceive the debate as a source of greater discrimination every bit as much as the most recent arrivals. Among the first generation—the foreign born—51% see more discrimination flowing from the debate compared with 47% of the second generation—the U.S.- born children of immigrant parents—and 60% of the third-plus generations—the U.S.-born children of U.S.-born parents. There is no statistically significant difference in those responses.

The view was held in similar measures by U.S. citizens and non-citizens, and by those who are registered voters and those who are not. In each case, a little more than half saw more discrimination as a result of the debate. Latinos who identify themselves with the Republican Party were somewhat less likely to take this view (44%) than Democrats (57%) or independents (57%). And among Latinos who identified themselves as born-again or evangelical Christians—an important constituency for the Republican Party —55% said the debate made discrimination more of a problem. Among country of origin groups, only Cubans (35%) depart from the pattern. Puerto Ricans, who are U.S. citizens by birth, are as likely as foreign-born Mexicans to see more discrimination against Latinos resulting from the debate.

Participants in many of the pro-immigration rallies that took place across the country in the spring chanted, “Today we march, tomorrow we vote.” Three-quarters (75%) of Latinos surveyed agreed that as a result of the debate over immigration policy in Washington, many more Hispanics will vote in the November elections.

Latino voting still constitutes only a small portion of all votes cast in national elections—6% in 2004. Low levels of voter participation, combined with the high numbers of Latinos who are not eligible to vote because they are either not citizens or not old enough, meant that less than a fifth (18%) of all Hispanics voted in the 2004 elections. By contrast, about half (51%) of the non-Hispanic white population and about one-third (39%) of the black population voted in 2004, according to a Pew Hispanic Center analysis of population data.

Nevertheless, both Latino preferences and participation are closely watched because as a group Hispanics are the only fast-growing share of the electorate. From 2000 to 2004, the number of Latino voters jumped by 1.4 million, or 23 percent, twice the growth rate of non-Hispanic whites. Hispanics are also younger than the rest of the population—34% of all Latinos are 18 and younger, compared with 22% for the non-Hispanic white population. Unlike other Hispanic age groups, Latinos 18 and younger are overwhelmingly native born and thus eligible to vote when they turn 18. Between the 2000 and 2004 elections nearly 1.5 million native-born Latinos became old enough to vote, and the pace of that growth will accelerate.

The survey found overwhelming agreement that the debate over immigration policy will result in more Latinos voting. This view was held by a significant majority of Hispanics regardless of age, income, language preference, national origin group or whether Latinos were native born or immigrants. Evangelical Christians were just as likely to agree as those of other religions (76% vs. 74%).

Those who were the most educated, with a college degree or higher, were just as likely to expect voter turnout to increase because of the debate as those with a high school degree or less.

Next: IV. Impact of the Immigration Marches
← Prev Page
Page1Page2You are reading page3Page4Page5Page6Page7
Next Page →