The most recent data available from the U.S. Census Bureau shows that nearly 9.7 million persons born in Mexico who were at least 18 years old lived in the United States as of March 2005.1 Given that population’s pace of growth in recent years, the estimated number of Mexican adults now living in the United States is about 10 million.

The survey was taken from a nationally representative sample of that population. However, only a fraction of that population is eligible to vote under the law enacted by the Mexican government last year. The law requires expatriate voters to hold a valid electoral credential and to have it with them in order to apply for an absentee ballot. Slightly less than a third (31%) of Mexican adults said they have a valid electoral credential with them in the United States.

Applying the survey results to the population data yields an estimate of about 3 million eligible voters living in the United States.

Fewer than two percent of those eligible voters applied for absentee ballots. The IFE, the Mexican elections institute, accepted ballot applications until February 15, one month after the deadline for dispatching the applications to Mexico by registered mail. The IFE announced February 16 that it received 56,749 applications for absentee ballots from around the world with some 89% coming from the United States. That would be about 50,500 applications. The actual number of valid applications, however, is likely to be lower. The IFE reports that a substantial number, perhaps as many as a fifth of the applications receive, may be disqualified because they were not sent by registered mail as required by the law on expatriate voting.

The estimate of about 3 million eligible voters living in the United States is in line with estimates drawn from other sources.

According to the IFE, the Mexican elections institute, regular household surveys of registered voters show that 4.2 million Mexicans who hold a valid electoral credential no longer live in Mexico. The institute estimates that some fraction of those individuals is assumed to have either left their credential behind or have lost them (News Conference in Washington on November 17, 2005, Luis Carlos Ugalde, president of the IFE, official transcript, Sala de Prensa Virtual, www.ife.org.mx)

A previous survey conducted by the Center produced comparable results. The Survey of Mexican Migrants involved a sample of nearly 5,000 Mexicans who were interviewed between July 2004 and January 2005 in seven Mexican consulates around the U.S. All were in the process of applying for a matrícula consular, an identity card issued by Mexican diplomatic missions, when they were interviewed. That survey was designed to produce a portrait of recently arrived migrants who are the ones most likely to be applying for a matrícula, and the sample included a disproportionate number of recent arrivals. In that survey, 42% of respondents said they had a valid credential, but as noted in the report, adjusting the data to account for the over-representation of new arrivals would lower that percentage. Weighting the data according to time of arrival yields a result of 35%.

The key characteristic distinguishing eligible voters from the rest of the Mexican population in the U.S., both in the Survey of Mexican Migrants and in this survey, is the amount of time they have been here.

The election credential in its current form was not available when many longterm migrants left Mexico, and in recent years the credential has become widely accepted as a general purpose identity document. As a result, the pool of eligible voters is substantially made up of people who recently left Mexico. Those who left the country in the past five years account for 29% of the eligible voters; those who left in the past ten years account for 53%. (See Figure 2)

Given that recent immigrants are most likely to hold a voting credential, it is not surprising that eligible voters are disproportionately young. Among eligible voters 54% are between the ages of 18 and 34 compared to 40% of Mexicans who do not have a credential. 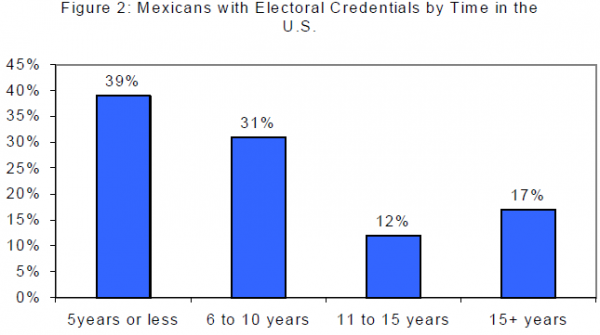 Also, a greater share of eligible voters (65%) sends money home to Mexico in remittances than among those without a credential. (55%).

Next: III. Scant Knowledge of the Election and Electoral Procedures
← Prev Page
Page1You are reading page2Page3Page4Page5Page6Page7Page8Page9
Next Page →