Nearly nine of ten respondents (87%) in the Survey of Mexican Migrants said they would cast votes in the next Mexican elections from the United States if they could. Only a tenth of the respondents (10%) said they would not. The same overwhelming sentiment in favor of voting in Mexican elections was expressed across every demographic category and in every location where the survey was conducted. No significant differences emerged by gender, education or the amount of time a respondent had spent in the United States. However, older voters were somewhat more likely to say they wanted to exercise the franchise in Mexico, with 90 percent of those over the age of 50 saying they would vote if they could, compared with 84 percent of those 18 to 29 years old.

Currently, by law only Mexican citizens who are in Mexico on polling day are allowed to vote in elections for federal offices. As of this writing, the Mexican Congress is debating a measure that would grant the vote in presidential elections to Mexicans who are outside the country at the time of the balloting. Mexico will hold its next vote for president in 2006.

Figure 1: Voting in Mexican Elections
Si usted tuviera la oportunidad de votar en las próximas elecciones mexicanas en los Estados Unidos, ¿votaría?
(IF YOU COULD VOTE IN THE NEXT MEXICAN ELECTIONS FROM THE U.S., WOULD YOU?) 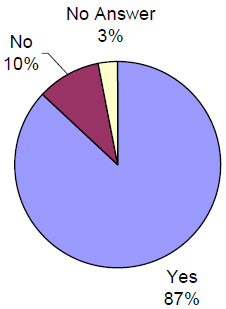 Slightly more than four of ten respondents (42%) said they had brought their Mexican electoral credential with them to the United States. This credential is a form of photo ID that resembles a U.S. driver’s license. It is issued by the Instituto Federal Electoral, an autonomous public agency that was created as part of a constitutional reform in 1990 to conduct presidential and congressional elections. In recent years the electoral credential has become widely accepted in Mexico as a standard identity document for a variety of purposes. A key issue in the congressional debate in Mexico is whether to permit voting only by migrants who already hold a valid voting credential issued in Mexico or whether to issue credentials in the United States.

Migrants who have been in the United States for just a relatively few years are much more likely than those of longer tenure to say they have the credential with them. This could be the result of several factors. For one thing, Mexico has only recently started issuing the voting credential in its current form, and its use as a general-purpose identity document is also a recent phenomenon. Moreover, in order to get a card a Mexican citizen has to register at the office of the election institute that oversees voting in his or her home town, file an application, wait an average of 20 days for notification that the application has been accepted, and then reappear at the office with an official document establishing identity (the matrícula consular is not accepted for this purpose). For some migrants of long tenure in the United States, aspects of this process could prove burdensome. Thus it is not surprising that the share of respondents who said they had the credential declined sharply according the amount of time that they said they had been in the United States. 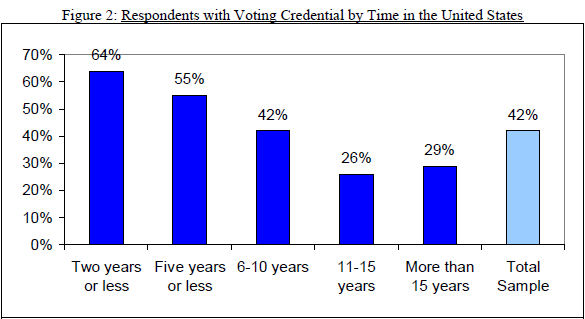 If holding a valid election credential issued in Mexico is a requirement for absentee voting, then a greater share of recent migrants than those of longer tenure will be entitled to vote. Because of the nature of migration patterns this would in turn influence where in the United States the votes are cast.

Differences from one survey location to another in the shares of respondents holding a voting credential largely reflect differences in the mix of recent and long-term migrants surveyed in each location (see: Survey of Mexican Migrants, Attitudes about Immigration and Major Demographic Characteristics, Pew Hispanic Center, March 2, 2005). Traditional settlement areas such as Los Angeles and Fresno, CA, have larger shares of long-term migrants than new settlement areas such as Raleigh, NC, and New York.

There are similar differences in terms of where Mexican migrants come from. Smaller shares of respondents from states with well-established migration patterns, such as Jalisco and Michoacán, said they had been in the United States for five years or less; by contrast, respondents from states with relatively new migrant flows such as Puebla and Veracruz were more likely to have arrived within this period. The figures below show results from a selection of Mexican states with major migratory flows to the United States. 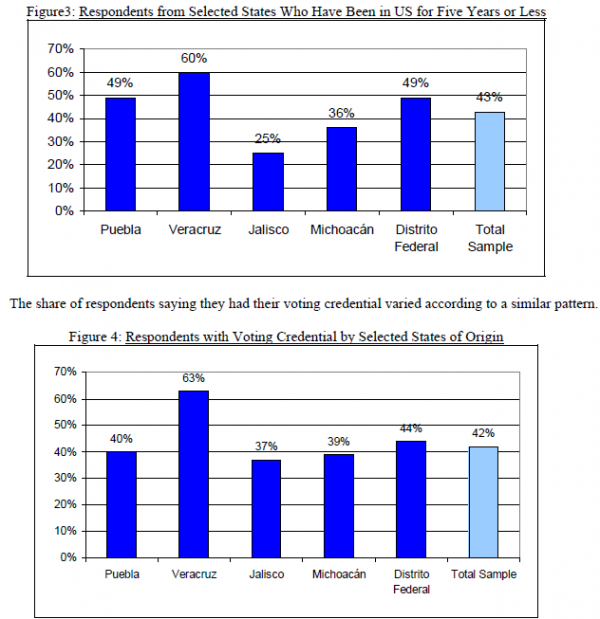 Given that more recently arrived migrants are more likely to hold a Mexican voting credential than those who have been in the United States for many years, according to the survey findings, then the share of survey respondents holding the credential is almost certainly higher than in the population as a whole. Thus, it would be a mistake to assume that because 42 percent of the survey respondents hold an election credential, the same percentage of the approximately 10 million Mexican citizens living in the United States hold a credential. Because there is a larger share of persons of longer tenure in the full population than in the survey sample, the number holding voting credentials should be lower.

Next: III. Ties to Mexico
← Prev Page
Page1You are reading page2Page3Page4Page5Page6
Next Page →