Between 1990 and 2000 large numbers of Hispanics were added to a handful of states where Latinos have long been concentrated. In addition, several states that previously had comparatively small numbers of Latinos saw very rapid growth in their Hispanic population. The change in the population numbers for Latinos was largest in the traditional states (8.9 million vs. 2.2 million), but the pace of growth was fastest in the new settlement states (130% vs. 50%). In 2000 nearly nine of every ten Hispanics (87%) lived in what can be termed either a traditional or a new settlement state (see “Methods” above). The rest lived in states with relatively small Latino populations that underwent modest growth in the 1990s. There are striking differences between traditional and new settlement states in the ways that Latinos cluster at the neighborhood level. 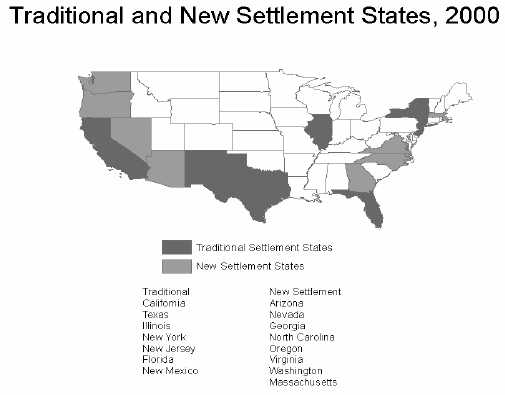 In traditional states the Hispanic population was almost evenly divided in 2000 between communities in which Latinos constituted a majority of the population and those in which they were a minority. In the new settlement states, however, the number of Hispanics in minority-Latino neighborhoods was more than three times larger than the number in heavily Latino communities. 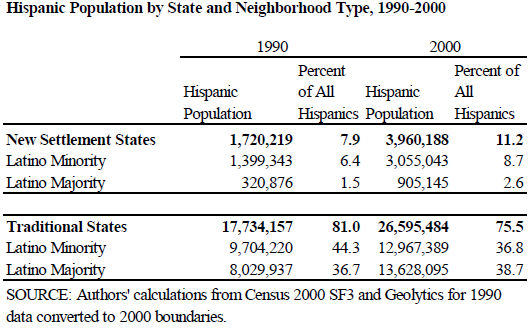 In the new settlement states, about three-quarters (74%) of the growth took place in non-Latino neighborhoods. Thus, as the Latino population dispersed to new areas of the country the vast majority of these new arrivals settled in neighborhoods where Hispanics were a sparse presence. This runs contrary to the classic model of ethnic clustering in which new arrivals in an area seek out each others’ company. Given that there were relatively few Latinos in these states as the process of dispersal got underway in the 1980s, these new arrivals did not have the ready option of seeking out already established Latino communities of the sort that exist on a large scale in the traditional Hispanic states. On the other hand, this process has already been underway for a decade at least and involves many thousands of people, and yet the census data suggests that the primary trend in the new settlement states is not the formation of high-density Latino communities. Rather, dispersal on a national level is being mirrored by dispersal at the local level in the new settlement states. 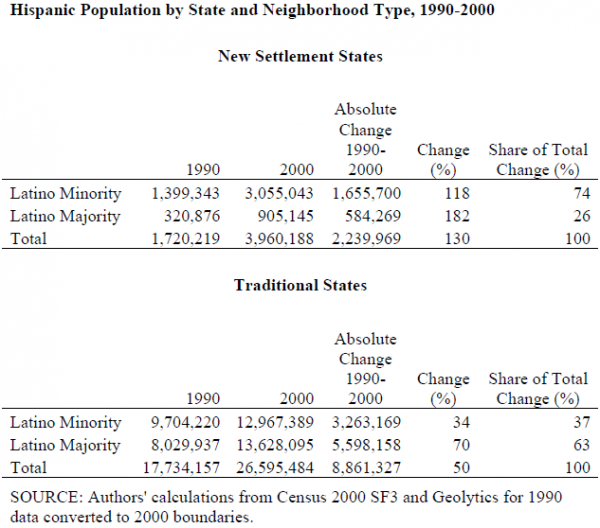 In the traditional Hispanic states, the relationship between growth and residential settlement is very different. While the rate of growth was faster in the new settlement states, the number of Hispanics started out far higher in the traditional Hispanic states and the number added was also much greater. While the new settlement states saw a process of dispersal, the addition of nearly 9 million Latinos to the population of the traditional states was accompanied by an increase in the number of Latinos living in neighborhoods where Latinos are a majority of the residents and in the geographic scope of such communities. This is evident both in measures of the number of people involved and of the pace of growth.

The 5.6 million Hispanics added to heavily Latino communities in traditional Hispanic states represented 63 percent of the overall growth of the Hispanic population in those states. Moreover, the population in these communities grew twice as fast as in low concentration neighborhoods. Given these very large numbers, this process could not simply have added residents to existing enclaves because there was simply not enough room in the existing majority-Latino communities for so many more people. Indeed, those neighborhoods overflowed. Mapping the change in several of the major metropolitan areas where this growth took place shows a process of geographic expansion. Existing Latino neighborhoods did not merely grow denser; they grew bigger.

Next: VI. Examples of Growth in Traditional and New Settlement States
← Prev Page
Page1Page2Page3Page4You are reading page5Page6Page7
Next Page →

Latinos Account for Half of U.S. Population Growth Since 2000

Hispanics and the 2004 Election: Population, Electorate and Voters