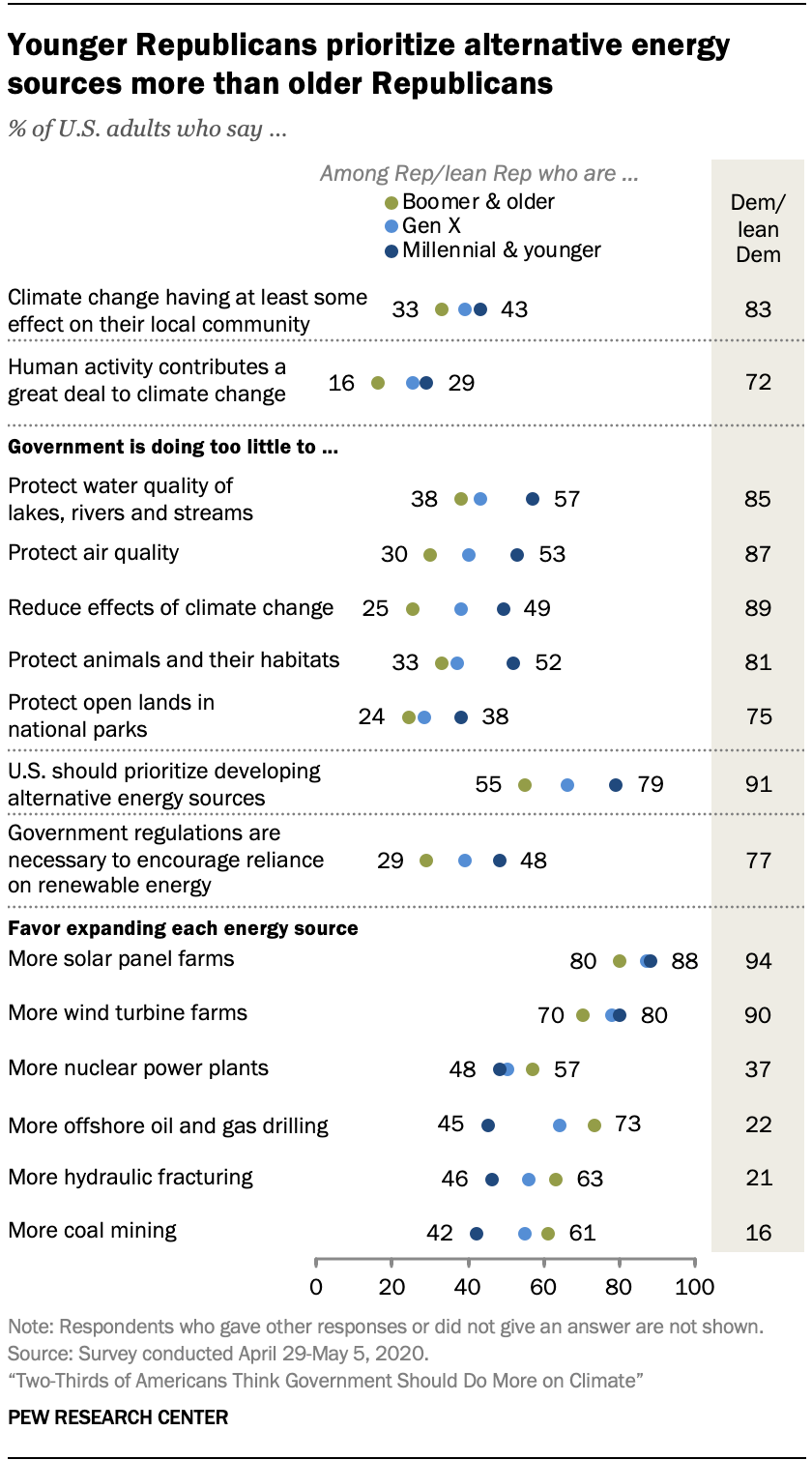 Republicans in the United States are divided by generation on key questions related to climate, environmental protection and energy production, according to a new Pew Research Center survey.

Millennial and Gen Z Republicans – those currently ages 18 to 39 – are more likely than their GOP elders to think humans have a large role in climate change, that the federal government is doing too little on climate and that the U.S. should focus on developing alternative energy sources. For example, while relatively few Republicans overall say human activity contributes a great deal to climate change, Millennial and Gen Z Republicans are significantly more likely than Baby Boomer or older Republicans to say this (29% vs. 16%), according to the survey of U.S. adults conducted April 29-May 5.

Millennial and Gen Z Republicans also are more likely than older Republicans to say climate change is having at least some impact on their local community (43% vs. 33%) and that the federal government is doing too little to reduce the effects of climate change (49% vs. 25%).

Everyone who took part is a member of Pew Research Center’s American Trends Panel (ATP), an online survey panel that is recruited through national, random sampling of residential addresses. This way nearly all U.S. adults have a chance of selection. The survey is weighted to be representative of the U.S. adult population by gender, race, ethnicity, partisan affiliation, education and other categories. Read more about the ATP’s methodology.

Millennial and Gen Z Republicans are more critical than Baby Boomer and older Republicans of government action across several aspects of the environment, too. Larger shares of younger than older Republicans, for instance, say the federal government is doing too little to protect water and air quality, animal habitats and open lands in national parks.

Striking differences also emerge within the GOP when it comes to energy issues. Millennial and Gen Z Republicans are more likely than Baby Boomer and older Republicans to say the nation should prioritize developing alternative energy sources over expanding the production of fossil fuels (79% vs. 55%). And younger Republicans are much less inclined than their elders to favor expanding offshore drilling, coal mining and hydraulic fracturing. For example, 45% of Millennial and Gen Z Republicans support increased use of offshore drilling, compared with 73% of Boomer and older Republicans. The differences are less pronounced when it comes to expanding solar power and wind power farms: Majorities of Republicans across age cohorts would favor these efforts.

Generational differences within the GOP over climate, energy and the environment are consistent with those seen in previous Center surveys. (In this analysis, Gen Z adults are combined with Millennial adults in part because their views on a range of issues – including the role of government, diversity and climate and energy – are similar to those of Millennials.) 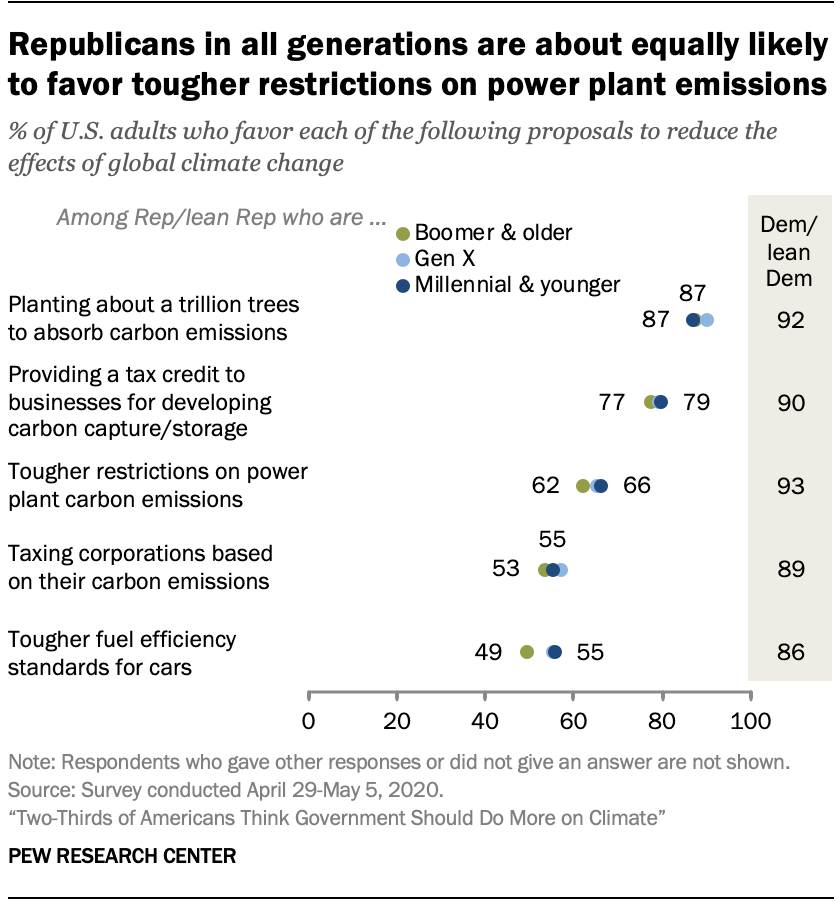 Despite differences in views about the impact of climate change, younger and older Republicans tend to align when it comes to policy approaches aimed at reducing the effects of climate change. For example, similar majorities across each generation in the GOP support providing tax credits to businesses that develop and use carbon-capture technology. And similar shares of younger (55%) and older (53%) Republicans favor taxing corporations based on their carbon emissions.

Note: This is an update of a post originally published on Nov. 25, 2019. Here are the questions used for this analysis, along with responses, and its methodology.

Two-Thirds of Americans Think Government Should Do More on Climate
Key findings: How Americans’ attitudes about climate change differ by generation, party and other factors
How Americans see climate change and the environment in 7 charts
On climate change, Republicans are open to some policy approaches, even as they assign the issue low priority
On social media, Gen Z and Millennial adults interact more with climate change content than older generations