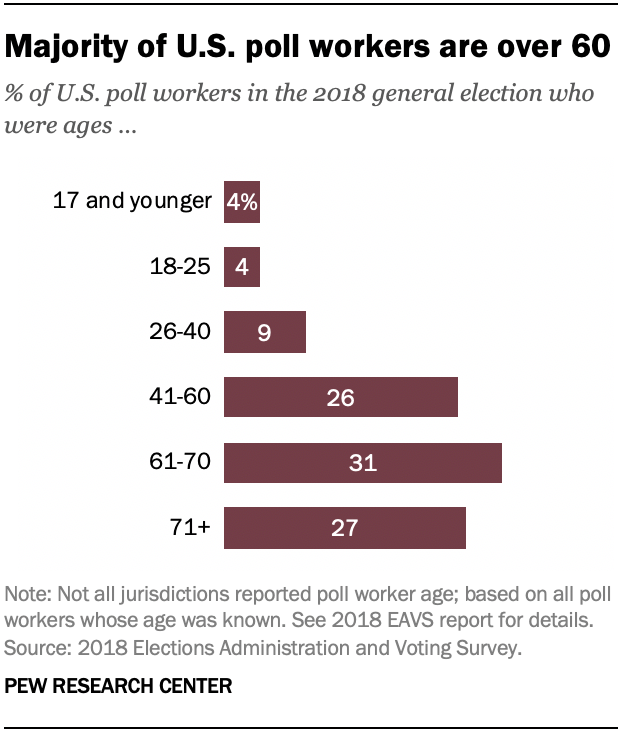 This analysis is based on government data from the 2018 Election Administration and Voting Survey (EAVS), a biennial study of states’ administration of federal elections. Overall, the 2018 EAVS is based on responses from 6,458 jurisdictions in all 50 states, the District of Columbia, and four U.S. territories, a 99% response rate. However, it includes the following caveat about their calculation of the age of poll workers: “The age distribution of poll workers as reported by states includes both Election Day poll workers and poll workers who assisted during early voting. Common sources of state data on poll worker ages are voter registration records, payroll records, or poll worker applications. However, not all states collect these data; Connecticut, Iowa, Illinois, Kansas, Louisiana, Massachusetts, Minnesota, North Dakota, New Hampshire, New Jersey, Pennsylvania, Rhode Island, Virginia, Vermont, and Wisconsin reported not being able to provide this information. Oregon and Washington did not report these data because they do not conduct any in-person Election Day voting. Because some states were able to provide the total number of poll workers but not the age breakdown, the denominator used in this analysis is the sum of the number of poll workers that jurisdictions reported in each age category, not the total number of poll workers reported.”

The data on voters and nonvoters is drawn from Pew Research Center’s study of validated voters in the 2016 general election. That analysis matched members of the Center’s nationally representative American Trends Panel (ATP) to voter files to create a dataset of verified voters.

The data on Americans’ comfort with going to polling places and opinions about the necessity of postponing primaries is based on a survey of 11,537 U.S. adults conducted March 19-24, 2020. Everyone who took part is a member of the ATP, an online survey panel that is recruited through national, random sampling of residential addresses. This way nearly all U.S. adults have a chance of selection. The survey is weighted to be representative of the U.S. adult population by gender, race, ethnicity, partisan affiliation, education and other categories. Read more about the ATP’s methodology.

The coronavirus is especially dangerous for older adults. Eight-in-ten COVID-19-related deaths in the U.S. have involved adults 65 and older, according to the Centers for Disease Control and Prevention. The CDC considers seniors to be at higher risk for severe illness from the virus and encourages them to take the same precautions as people with chronic health problems. Doctors have advised seniors with several underlying health conditions to self-isolate during the outbreak.

If older Americans are unable to leave the house and serve as poll workers this year, it could exacerbate a common problem with the administration of elections. In the 2018 EAVS survey, roughly two-thirds of jurisdictions (68%) said it was very or somewhat difficult to find enough poll workers for that year’s general election.

Of the 2,817 jurisdictions that answered the question, just 15% said it was very or somewhat easy to find enough poll workers. This challenge is already playing out amid the coronavirus outbreak: Wisconsin has struggled to recruit poll workers and even asked its National Guard to assist in primaries originally scheduled for April 7. Gov. Tony Evers issued an executive order to delay the primaries until June but it was later blocked by the state’s Supreme Court.

Even if polling places can be staffed, the outbreak may also restrict Americans’ willingness to come out to vote. In a Center survey conducted March 19-24, around two-thirds of all Americans (66%) – and 64% of those ages 65 and older – say they would feel uncomfortable going to a polling place to vote, while wide majorities of Americans of all ages say postponing upcoming primaries has been a necessary step to address the coronavirus outbreak.

Older Americans traditionally turn out to vote at higher rates than younger adults. In the 2016 presidential election, roughly a quarter of voters (27%) were ages 65 and older, according to a Center analysis of validated voters. In contrast, only 9% of nonvoters were in this age group.

A basic question when reading a poll: Does it include or exclude nonvoters?
Mail-in voting became much more common in 2020 primaries as COVID-19 spread
Why public opinion polls don’t include the same number of Republicans and Democrats
Exit polls, election surveys and more: A guide for the 2018 midterms
Gen Z eligible voters reflect the growing racial and ethnic diversity of U.S. electorate