As COVID-19 spreads around the world, billions of people are being asked to stay home, except to buy necessities or access health care. While quarantine rules are usually the same for any one community, the experiences of individual people can vary substantially depending on their personal living arrangements.

A recent Pew Research Center study examined household living arrangements in 130 countries and territories. It found stark differences by region and country in the size and type of households experienced by average people. Here’s a look at some of the study’s findings, which may shed light on how coronavirus-related quarantines are being felt.


For this analysis, we looked at data on people’s household arrangements in 130 countries and territories, which are home to 91% of the global population. The findings were originally published in the report “Religion and Living Arrangements Around The World.”

The aggregated dataset includes 82.6 million individuals from 20.8 million households. Data comes from a variety of censuses and surveys conducted between 2010 and 2018, including the Demographic and Health Survey, Multiple Indicator Cluster Survey and European Social Survey. The analyses required data on religious affiliation and household rosters – lists of every member of a household along with their age, sex and relationship to the survey respondent. Rosters were used to code household types, such as extended family, couple, solo, adult child and two-parent.

The population examined in this post doesn’t include people living in institutions, such as nursing homes or prisons. However, the share of older adults in nursing homes is generally very small; in the U.S., fewer than 5% of adults ages 60 and older live in that type of facility.

Here is the report’s methodology and a list of data sources by country. 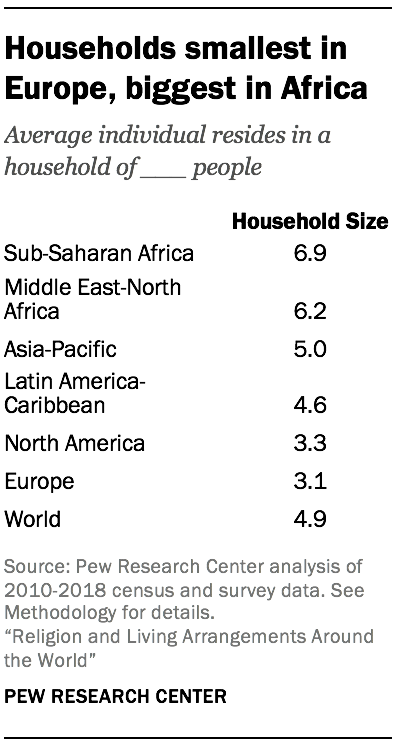 Around the world, the average person lives in a household of 4.9 people, but this number is much bigger in the sub-Saharan Africa (6.9 people) and Middle East-North Africa regions (6.2), and is smallest in North America (3.3) and Europe (3.1).

In households where many people live together, the risk of contagion is heightened if anyone in the household falls ill or becomes an asymptomatic carrier of the coronavirus.

Gambia and Senegal have the world’s biggest households, with an average person living with a dozen or more family members, but living arrangements also are fairly expansive in larger countries, such as Pakistan, where the average individual experiences a household size of  8.5, Nigeria (7.7), and India (5.8). China, where the coronavirus originated, has relatively small households (3.8), partly as a result of a one-child policy that was enforced for several decades.

In Latin America, household sizes tend be around the global average, at roughly 4.6 members per household. Official responses have ranged from the Mexican government’s appeal for all people to stay home for a month to the Brazilian president’s insistence that “Brazil can’t stop.”

In the United States, meanwhile, the average person lives in a household of 3.4 people.

Household type also plays an important role in how people might be experiencing the effects of the coronavirus. A home that has multiple extended family members – including aunts, grandparents and cousins – sharing resources and chores under one roof, for example, will face very different challenges during a pandemic than a single-parent household where one adult is caring for one or more children.

Around the world, extended family arrangements are the most common, accounting for 38% of all people. This is followed by two-parent households – where two adults live with minor children – which account for 33% of the world’s population.

Extended families are widespread in India (54%), while two-parent families are the norm in the Middle East-North Africa region (56%). In Egypt, Jordan and the Palestinian territories, for example, three-in-five people or more live in two-parent households.

In the U.S., two-parent households are the most common type of arrangement, accounting for a third of all people (33%). Roughly two-thirds (67%) of all U.S. children younger than 18 live with two parents.

Children appear less likely to get seriously sick from the virus, but they can infect older household members, often unwittingly if they are not showing symptoms. Meanwhile, school closures are widespread in many countries amid the COVID-19 outbreak, forcing parents to educate – or at least supervise – their children at home. And in some cases, parents are facing the consequences of the pandemic without a partner in the same home.

Other countries where children are much more likely than their peers around the world to live with a single parent are the UK (21%), France (16%) and Canada (15%); in these places, the share of children in single-parent homes is at least double that in most other countries. 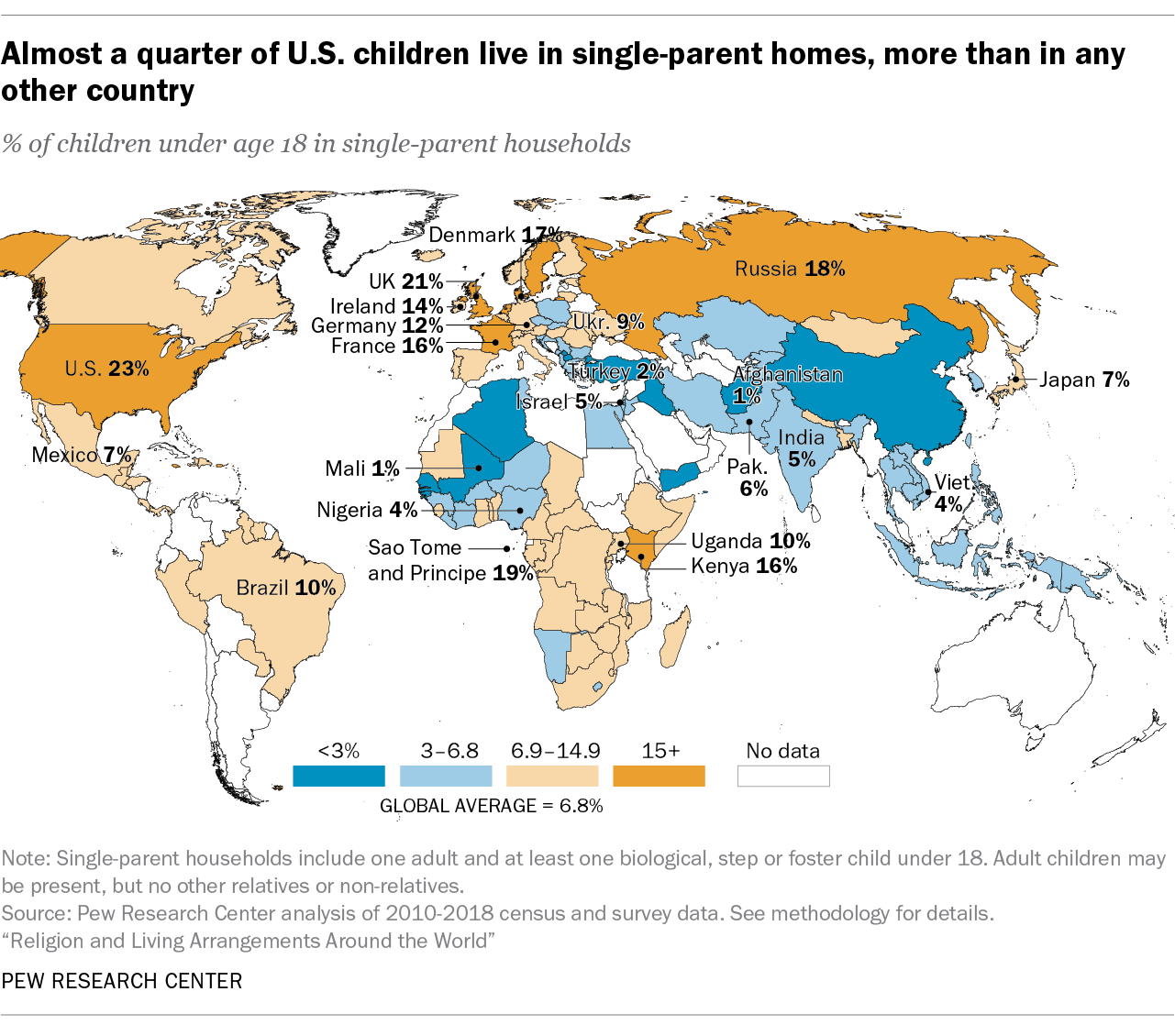 Older people are especially vulnerable to the novel coronavirus and, worldwide, they are more likely than younger people to live alone. Globally, 16% of adults ages 60 and older live in solo households, compared with just 4% of adults ages 18 to 59. Older women are almost twice as likely as older men to live alone (20% vs 11%).

Living alone has been linked to mental health complications, and, during a pandemic, when face-to-face socializing is discouraged, people who live alone may struggle more than others with loneliness. On the other hand, living alone can be beneficial in reducing a person’s chance of getting infected by another household member.

Older adults in the U.S. (27%) live alone more often than seniors in most other countries, partly because solo households are generally more common among all age groups in more economically advanced parts of the world. In Europe, for example, three-in-ten adults 60 and older live in solo households, including seniors in France, Germany, Italy and Spain.

Among all age groups in the U.S., 11% of all people live in solo households, almost three times the global average of 4%. Solo households are also fairly common in Europe (13%).

In most other parts of the world – including in Asia – living alone is relatively rare. In China, 5% of individuals occupy solo households. In Iran, one of the countries hit especially hard, and in India, where the government in March imposed a three-week ban on leaving one’s home, 2% or fewer of all people live alone. South Korea (21%) and Japan (15%) are exceptions to the rule, maybe because these countries are relatively wealthy, as measured by per-capita gross domestic product.